Leipzig, 31st of may 2022 in the night of the 31st of may we gathered some courage and burned a Hertz-car in Leipzig. Hertz is complicit with the greek police. We did so out of solidarity and affinity to Giannis Michailidis, who is in hungerstrike since the 23rd of may. Years of torture and of […]

Kassel, 19 may 2022 In the night of May 18-19, we attacked the business and office premises of the Turkish-Islamic Cultural Association of Europe (Avrupa Türk-Islam Birligi, ATIB) in Kassel with stones and paint. The ATIB association „Türkisches Kulturzentrum Kassel e. V.“ is located at Franzgraben 58. ATIB is a split-off of the ADÜTDF (Almanya […]

Attacks on warehouses from gorillas, flink and getir

Berlin, 1st of may 2022 on the night between april the 30h and the 1 of may, the warehouses from gorillas, flink and getir have been attacked. these companies have been selected as symbol of the advanced capitalism that rises the inequality in favour of a small elite.

Stones and Color Against Sanus AG

Berlin, 16th april 2022 on the night of 15th to 16th april we showed our anger about the eviction of kopi wagenplatz in a short moment of rage. we threw stones and colored one of sanus ag portfolio projects in bluecherstr 12. as long as living communities are getting evicted in the cold interest of […]

Berlin, March 19th 2022 For Maria B., Ferhat Mayouf, Qosay Khalaf, Gaetano B, Georgios Zantiotis,… Shot in their homes, burned in their cells or beaten up when arrested until they lost consciousness and died. They did not die, they were murdered. Murdered by cops. The police kill and the justice system covers up for them […]

Sabotage of engines in a sand quarry

Hambach forest (Hambacher Forst), march 2022 sabotage of engines in a sand quarry In the Kieswasche Buir antenna of the Rheinische Baustoffwerke, 6 or 7 working engines (digger excavator and others types) had their windows smashed, cables and pipes cut and some messages against concrete and it’s devastating role in the growing of civilization, and […]

Stones and colour tossed at „Thyssen-Krupp“ and „Obermeyer“ offices

Leipzig, february 10th 2022 In the night of 10 Feb, we attacked the office building at Kantstraße 2 with paint and stones. Two pig companies have their headquarters here. Thyssen Krupp and Obermeyer Group. With this attack we want to create attention for the bombardments of Turkey in Kurdistan. A few days ago, the Turkish […]

Berlin, 11th november 2021 The night of the 11 of November an attack on the new-built Gorillas warehouse in the Schlachthofviertel north of Friedrichshain took place. The glass windows and doors got smashed and a slogan in solidarity with the riders was written: strike back! We chose this type of action to express our solidarity […]

Bremen, September 21, 2021 “It is companies like Spie, WISAG, Massak, Sodexo […] that keep state rule alive through their pandering.” Inspired by the compas who already relieved Dussmann Service GmbH of three vehicles at the beginning of the year, we attacked SPIE in the night from Monday to Tuesday and burned out a van […]

Berlin, September 17, 2021 Some see an injustice in the institutions of the executive. Here, the officers hit a left-wing sit-in too hard in order to allow a right-wing march to pass, there they would act too gently against lateral thinkers, migrants would be deported to “unsafe” countries of origin, and if an officer’s trigger […]

Dresden, September 17, 2021 For some time now, militant resistance has been stirring against the ongoing construction of prisons in Zwickau. In the meantime, many companies involved in construction, planning or logistics have been affected. Particular attention was paid to the construction company Hentschke Bau, whose boss had also attracted negative attention through donations to […]

Berlin, july 5th 2021 Even if the smoke after the Rigaer 94 walk-through has cleared a bit in the meantime, this does not mean that the struggles for affordable and decent housing in Berlin and elsewhere have ceased. Many other tenants fear every year anew for their apartment and thus for their center of life. […]

Hamburg, june 21th 2021 When people from Rigaer94 are fighting for their self-managed spaces in Berlin these days and compas are defending themselves against red zones, we focus on the pomp of surveillance as a sign of solidarity. In the early morning of June 21, we attacked with stones the company Eurocommand, in the district […]

Berlin, june 2021 With more than a smile on our lips, we got to hear about the smoke billowing over Friedrichshain. While our friends had to wait for the storming of their house, we went out at night to break something. In the end we kissed 4 tires of 2 telecom cars, with the firm […] 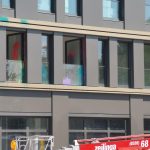 Bremen, june 6th 2021 Our feeling screams for revenge. Revenge for Qosay Sadam Khalaf. But what retribution is appropriate for the murder of a young person? How many cop vehicles and guards must burn? It cannot succeed. We act anyway. On the night of June 6, 2021, three months after the police murder of Qosay […]

Berlin, Juni 5, 2021 In the night from 04.06. to 05.06. we visited the owner of Köpi and Köpi Wagenplatz and left an unmistakable message with paint and fire extinguisher on the facade of his apartment in Karlsruher Straße 2a, 10711 Berlin. This Saturday (05.06.) a rally for Köpiplatz is to take place in front […]

Munich (München), May 21, 2021 Turn off the juice to war producers! Kick the ass of energy suppliers! We attacked the power and fiber optic network of the Stadtrwerke in the east of Munich on May 21.5.21. The primary target of this action was the arms company Rhode & Schwarz at the Munich Ostbahnhof, which […]

Bremen, May 1, 2021 Another spark in Bremen: Against the curfew! Against the world of order! Unmarked cop car torched downtown! We join the Autonomous Group that lit a fire on the first night of the curfew (https://endofroad.blackblogs.org/archive/12330). The curfew is enforced with a massive contingent of cops and property protection, which leaves no other […]

Berlin, May 1, 2021 The Central Committee of Berlin Autonomists summarizes the evening of May 1st and draws a preliminary conclusion. The revolutionary May 1st demonstration attracted far more people than expected to Hermannplatz. In the end, over 20,000 people were counted who wanted to march together through Neukölln and Kreuzberg. After the cops initially […]

Neu-Isenburg, April 24, 2021 Yesterday, in the night of 24.4 we set a SIEMENS company transporter in Neu-Isenburg on fire with an incendiary device. We ensured that people would not be injured and that other vehicles would not come to harm. We see ourselves as part of a worldwide movement that strives for a revolutionary […]

Leipzig, April 22, 2021 Burning cars in Leipzig. Our comrade Lina is still in custody. We are angry about that and that’s why we set fire to some cars of a car rental company tonight. Release her! Source: Indymedia

Berlin, April 18, 2021 Last week the constitutional court overturned the rent cap. For many Berliners, the rent cap determines whether or not they are able to afford an apartment in their hometown or their home of choice. The judgment makes this not only impossible but also means large repayments to the landlords. Such a […]

Berlin, April 14, 2021 Nissan is one of the largest international manufacturers of vehicles for police agencies, private security companies and the military. At the moment, vans and off-road vehicles from this Japanese company are beating the competition in the market. For example, the Hellenic Police recently announced that it would make the Nissan Qashqai […]

Schmölln, April 12, 2021 The „Barbaria Schmölln“ has burned down. It is a sports club where undisturbed neo-Nazis train, and where militant sports events of the neo-Nazi scene „Kampf der Nibelungen“ have already taken place. It is currently being described by Nazis as their social center and meeting place in online appeals for donations. Source: […]

Berlin, April 11, 2021 In Kurdistan, not a day goes by without war. In addition to military operations, the Turkish state is currently waging a low-intensity war. This means that smaller attacks are continuously being carried out at various levels (military, supplies, etc.). The purpose of the strategy seems to be to wear down the […]

Fire Set in the Gun Club of a Racist Murderer

Frankfurt am Main, April 9, 2021 Attacking the racist norm. Three right-wing murders in Hesse – Kassel, Wächtersbach, Hanau. All perpetrators were members of the local gun club, and trained there for their murders. If no one takes responsibility for racists and fascists are preparing for assassinations and civil war in this country, we do. […]

Frankfurt am Main, April 7, 2021 In the night from april 6 to 7, we set fire to an excavator and a large rolling vehicle belonging to the construction company STRABAG at a construction site in the forest between schwanheim and the airport. To do this, we made use of wooden pallets provided by STRABAG, […]

Bremen, April 1, 2021 Companies like Spie, WISAG, Massak, Sodexo….. or, as in this case, Dussmann, keep state power alive through their pandering. It is a misconception to think that companies like Dussmann Service GmbH are neutral. They make the decision to profit from degrading and exploiting people. They consciously poison and destroy the bodies […]

Leipzig, March 27, 2021 We took the nationwide Housing Action Day as an opportunity to set fire to the vehicle fleet of the municipal LWB (Leipziger Wohnungs- und Baugesellschaft). During the global pandemic of the century, the LWB did not miss the opportunity to increase the rent in the so-called music district as it does […]

Wuppertal, March 27, 2021 Yesterday morning, over the night of 26.04. to 27.04., in solidarity with all prisoners, the homeless and refugees, we surrendered a company van of WISAG Facility Service to the flames. Wisag consists of three holding companies, which are all managed by Wisag Dienstleistungsholding. As Wisag Aviation Service Holding GmbH, Wisag is […]

Various cars burned out in Berlin-Mitte

Berlin, March 19, 2021 Fire Protection. A quite remarkable passion of the German civil service. Sometimes it makes generations of provincial politicians in metropolitan mania despair of their billion-dollar BER. Other times it creates the unimaginable: from SPD to AfD, political bigwig to hundred-man cop, real estate speculator to regular nazi – all of them […]

Hamburg, March 8, 2021 During the Corona pandemic, social egoism became more obvious than it had been for a long time. Despite empty hotels, the politicians in Hamburg’s parliament were not able to provide single rooms for homeless people. Instead, they repeated the traditional phrase about the free locations in the winter emergency programs. But […]