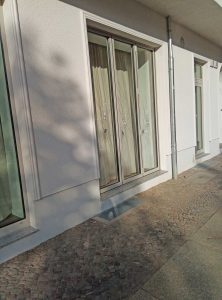 We are here. We are angry. On 22.04.2019, in the quiet of Friedrichshain‘s night, we let our anger out on the glass windows of the bottom floor of an empty Padovicz house in Seumestraße 1.

We are angry, because investors like Padovicz think, they can just take away our houses, destroy our kiez and rid the city of people like us. The Liebig34 is more than just a house, a bar and an Infoladen. Liebig34 is an institution. Liebig34 was gained in the house struggle in the 1990s, in which many houses were lost to investors and comrades were lost to repression. The eviction of Liebig34 is not just a loss to those people who live in the house and use the house, but a loss to our collective struggle for a different city. It is a loss, that is not acceptable.

In the words of Bash Back!:

„Becoming beautiful means becoming fearless. Do not associate this beautiful fearlessness with the common definition. Accept all the emotions as legitimiate and powerful. To the beautiful, fearlessness does not mean without fear but fear without the possibility of stagnancy and paralysis induced by possible consequences of revolt. Instead the beautiful would Allow fear to signal caution, thought and wisdom prior to any altercation with the Ugly. This type of fearlessness will insure a stable and safe route for Beauties in Becoming.

The queer or whore of native or person of colour is the sword of those on the road to Beauty. Oppression has given a resentment to these particular factions that the pimp-or-whitey-or-straight will never know. An advantegous position to hold. If the opressed embraced the rage that only they know, and used it as the most powerful weapon that it is, than nothing ugly could ever truly stop the beautiful. This rage is what ensures survival. It is why, regardless of millenia of colonization, the native, the whore, the person of color, the tranny, and the queer still exist“

Everyday is a perfectly resasonable day to to get completely histerical at all those arseholes that want to destroy Liebig34.