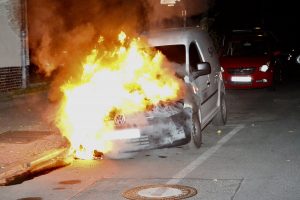 Nothing is forgotten.
Even two years later, we have not forgotten the days and nights of the G20 summit in Hamburg; the euphoria on the faces of those in revolt, the headlines about the nightly attacks in the lead up, the noticeable nervousness of the law enforcement officers. We remember the beginning of the campaigns focusing on the G20 and the desire to continue our mutual reference through targeted attacks beyond that short time frame.

It was quiet for a very long time after the summit, here and there were some very good clandestine actions, but the awareness of our strength seemed to have been lost very quickly. Thousands of revolts, hundreds of actions before, but the solidarity towards the detainees remained small and of a short duration. From time to time they were still greeted in communiques, but in view of the overwhelming protests these mentions can only be dismissed as marginal. By shutting down our communication platform at linksunten, the state cut off one of our most important pieces of infrastructure and hoped that our attacks would subside. Here too, it was unusually quiet for a long time, but our attacks did not stop.

Persistent waves of repression continue to overrun our structures and are intended to make us afraid of what will happen if we stand up to the State. The cops are still looking for the needle in the haystack to finally be able to present successes, to find those who deprive them of their sleep. Now the media have announced that the cops have managed to stab the anarchists in the heart. However, the 3 people arrested on the park bench armed with incendiary devices only created a new point of reference among us and brought the explosive mood of the summit back into our memories.

It seems that the lethargy that followed the summit has disappeared and countless communiques of solo actions and attacks have appeared. We join them, because only our collective rage, our longing for another world and the determination that comes with it can accompany our journey. We send our fiery greetings to the Park Bench 3, to Loic and all the other prisoners!

Out of rage, solidarity and complicity, we placed a Hamburg-style incendiary device under the front right tire of a SPIE car during the night of Wednesday to Thursday.

The company SPIE is one of many who profiteer from imprisonment and oppression and sabotage of their property is a way to directly attack domination. Because only via contributors like SPIE can this system work. (https://chronik.blackblogs.org/?p=9182)

It was with great pleasure that we heard about the attack against Telekon AG (https://anarchistsworldwide.noblogs.org/post/2019/07/31/leipzig-germany-telekom-vehicles-torched-in-solidarity-with-the-park-bench-3/) and the reference in the communique to a declaration made before the summit.

The fires will put a smile on your face.

The ones from another park bench.