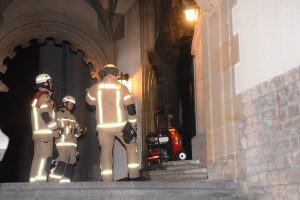 The militant, autonomous groups have already welcomed the Tu Mal Wat / Reclaim The City Days with some messages and we also want to report with this first greeting and an incendiary message, which we left at the Pankow/Weißensee on early Friday morning, September 27, 2019.

While a helicopter of the state henchmen circled over the center to spread their repressive climate over the Tu Mal Wat days, we, as an autonomous group, attacked the main entrance of the Pankow/Weißensee district court last night with a several liters of incendiary liquid. We had already disappeared from the field of vision of the seemingly omnipresent eye when our nocturnal attack was first noticed.

This makes it clear that attacks against the symbols of power can happen at any time, anywhere in the city. Whether with incendiary devices, stones, paint, posters or face to face self-organized meetings, the anarchist resistance against domination and capitalism will always cause damage to goods and morale in the ranks of the rulers and possessors.

The militant autonomous groups have already welcomed the Tu Mal Wat Days with a few messages, and we too would like to address you with this first greeting.

We have chosen this target because the state judiciary will never provide justice, because its only task is to legitimize the existing relationships of violence. What is most obvious in criminal justice also applies to civil matters. With its facilities, it helps landlords, housing associations and investors to determine our housing and living situations. What, for example, is presented before the Pankow Court as an agreement or resolution in matters of tenancy law is nothing more than a punishment for those who do not have money and property.

Specialist law firms sue tenants from their apartments, while these usually fail with lawsuits against landlords. Then court fees are due and bailiffs enter our doors.

Solidarity and militant greetings to the many occupiers today!