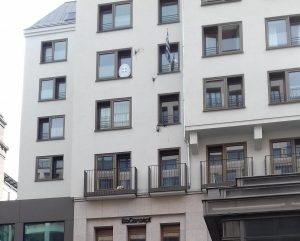 In view of the intensified state attack that has been taking place in Greece since the end of August, we attacked the Greek consulate in Berlin with hammers, spray cans and paint bombs in a symbolic attack on October 3rd.

The hard line of the right-wing Nea Dimokratia (New Democracy) of Kyriakos Mitsotakis, who announced during the election campaign that he would “clean up” Exarcheia, has turned out to be a multi-layered wave of repression.

One of the first acts of the Minister was the recruitment of 1500 new cops and the commissioning of the Delta police motorbike units.

At the end of August, the pre-announced attack on political squats in Exarcheia and autonomous self-organized refugee housing in Athens began. On August 26th, four houses were simultaneously cleared and sealed off, 3 people were arrested and 173 others were sent to refugee shelters or deportation camps. On September 19th, two houses on Acharnon Street were evicted, both self-managed refugee shelters with a total of 368 people, and on September 23rd, the 5th school in Exarcheia, a housing project for refugees occupied since 2016 with about 80 residents, was evicted.

This aggressive police policy of repression is reflected via the daily presence of cop units in and around Exarcheia, with brutal attacks against autonomous centres and events.

In the hell of Moria on Mitilini, in the hotspot where there are currently 13000 refugees, one person died on September 30th as a result of a major fire. The reaction of the government to the subsequent revolt was the sending of riot police units from Athens and the decision to transform the refugee camp into a closed camp meaning the refugees will no longer have permission to leave the camp during the day.

These are only some of the more visible events of a neoliberal, xenophobic, right-wing policy that is reflected in Greece, as well as in the rest of Europe, and is the result of a prolonged shift to the right of society. The expulsion of the weak of society, the repression against all structures that come from below, the systematic persecution of all resisters and the declaration that the state wants to “clean up” Athens are terms that can also be transferred to Berlin, Germany and many other places.

The threatened housing projects Liebig34 and Rigaer94, the occupied Wagenplatz DieselA 2.0 and the termination of the tenancy agreements of the youth centres Potse and Drugstore indicate how Berlin’s urban policy deals with self-governing projects.

In Athens and Berlin we are witnessing a politics that want to remove refugees, anarchists and autonomous structures from the city centers, symbolic of a constructed security, a smoothing of the way for the neoliberal machinery.

We oppose this development and declare ourselves ready to defend our free spaces.

Solidarity greetings to all comrades in Athens.