Arson Attack on Saxon federal office of taxes and finances 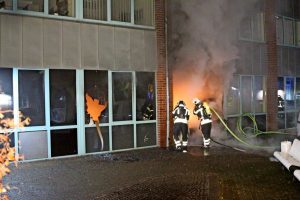 The Saxon federal office of taxes and finances (LSF) is in charge of the financial administration of the Saxon federal state and provides the juristic basis for enforcement measures and the enforcement of juristic judgments, such as forced evictions or confiscations to compensate debts. Being under patronage of the German state, this ministry performs the political agenda of the free market. The LSF is enforcing the national financial policy, which privileges companies and disadvantages the people. This policy is driven by the ideology of the “Black Zero”. The neoliberal doctrine of economizing provokes the capital’s overarching control over all social spheres. Through privatization and the cutting of taxes for major companies, any social attempt is buried completely under the logic of profit.
Under guidance of the German State the dictate of economizing (Spardiktat), which is targeting us here, is enforced all over Europe and worldwide. Germany bears the blame for economizing the Greek public to complete destruction, as well as for letting loose the property of the Greek people to the total exploitation of private investors. In consequence rampant unemployment arose, many people lost their base of existence, some committed suicide, many died on the streets, because they haven’t had shelter or couldn’t afford necessary medical support or medication.

Since the fascist occupation in world war 2, the chauvinist German politics in Europe pursued itself without a significant break. Since then the German state never paid the reparations for its cruelties. Due to the support by the imperial powers, the German state was pushed back on his feet and again established itself as a worldwide operating economic power. Needless to say that this walked along with the worldwide robbery of resources and the exploitation of cheap work forces from abroad. The establishment of the Montan-Union, the precursor of the EU nowadays, aimed to strengthen the economic supremacy of the German nation in Europe and marked a big step to the
continuation of German domination in Europe. Nowadays the austerity policy over other national economies is carried out in cooperation with the IMF and the European Central Bank. The heart of the beast is beating. German weapons are murdering everywhere in this world, German executive forces are schooling other special units in investigative procedures and riot control, German companies subjugate and murder workers worldwide.

From the year one, Exarchia has been a place of resistance against the ruling conditions, which are keeping an inequity alive. Its existance gives us the hope, that constituting a rebellious, militant and solidary neighborhood can originate from a revolutionary praxis. It‘s history is marked by anarchist, anti-authoritarian and communist fights, whether it was the struggle against the German occupation during world war II, the closely following fascist military dictatorship (1967-1974), the treacherous liberal-left governing of PASOK (back then) and Syriza (nowadays) or the now again ruling conservative-right Nea Demokratia. Yesterday, on the 6th of December, the anniversary of the murder of Alexis, shot cowardly by the pigs in the streets of Exarchia, took place. His assassination sat afire the rage of thousands, leading to massive riots and a public insurrection against the neoliberal system and the Greek state. As a result people build up a cop free area in Exarchia, filled with the attempt of solidary concepts of cohabitation and common struggling. As old as the rebellious history of Exarchia, as old are the attacks by the state and fascists powers against the resistance in the neighborhood.
In the bygone legislative era, Syriza tried a surgical strategy to control Exarchia. By evicting some of the local rebellious squats it simultaneously opened doors for the process of gentrification, tightened laws and deported and incarcerated refugees. By contrast Nea Demokratia is following a more offensive way of spreading fear by hard line repression politics. The list of its operations against struggling individuals and collectives since the elections in summer 2019 is already long: Introduced with the freeing of the murderous pig who shot Alexis, coming to the abolition of the university asylum, over the reestablishment of the Delta Hooligans, the employment of 1500 new pigs, the clearance order for almost every squat in Exarchia, the siege of “Anti Terror” Police, counterinsurgency police and civil units in Exarchia, as well as the just recently started “Anti Terror” Operation against anarchist companions.

The state capitalist attack on Exarchia shows some similarities to the process the neighborhood of Connewitz in Leipzig has to face at the moment. All rebellious structures are supposed to be demolished, so that investors have their hands free to sprawl. This social decomposition by the real estate market, where the inhabitants of a neighborhood are replaced by the ones who pay better, should happen in silence. The state is seeing its chance to pacify a rebellious neighborhood and the fascist wearing uniforms are licking their fingers, thinking of the opportunity having their hands free to fight this “unruly bugs”.

Since a couple of weeks the cops besiege the neighborhood of Connewitz and the investigation squad against “left extremism” was renamed and increased again. But for us, this isn’t a great sign to worry about, we will always be able to find the holes in their plan to attack properly. In times, while the cops are besieging our neighborhoods we try to work alike our companions in Athens, striking on different and inestimable places to remind the pigs, that we can act, move and strike wherever we want, untouched by their attempt to frighten us.

As an act of solidarity we set the Saxon state office for taxes and finances (LSF) on fire, in doing so we precluded the harm for human lives.

We are sending smoke signals of strength and love for freedom to our struggling companions defending Exarchia. Greetings to all fighting individuals and collectives! Our fight must go on, whether it be Exarchia, Connewitz, Berlin Nordkiez or elsewhere!

This smoke signals hopefully also reach the companions recently targeted by the terrorist state operators in Athens, especially the two imprisoned comrades and the comrade on the run! As well as the just yesterday imprisoned companions who went on the streets on the 6th to show their anger due to the murder of Alexis eleven years ago.

Freedom to all prisoners!