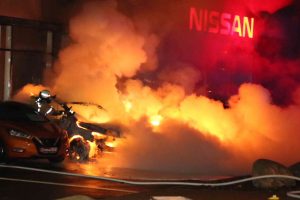 From Berlin to Greece and worldwide – Fire and flames to the state, capital and the bosses!

In the morning hours of 13th of December we set fire to five company cars and one radio antenna on the Deutsche Telekom premises at Hannemannstraße in Berlin-Britz as well as to two cars in front of the Nissan car dealership at Gärtnerstraße in Berlin-Alt-Hohenschönhausen.

Our attacks are aimed at two companies that are globally involved in securing the rule of power and enriching themselves by it, including in Greece, where the current government is threatening to evict all occupied houses and social centers and where those who do not allow themselves to be pushed into the neoliberal norm are subject to massive attacks by the state:

→ Deutsche Telekom, as the biggest european company for Telecommunications, which, profiting from the crisis, bought parts of the former state company Hellenic Telecommunications Organization S.A. (greek: OTE A.E.) and is now a 45% shareholder. With its subsidiary T-Systems, the Deutsche Telekom is worldwide leading in service for security authorities, industry and the energy sector.

→ Nissan, as a company, which supplies the greek repression authorities. In June 2019 four Nissan Qashqai Diesel 4×4 and two Nissan Navara for the Criminal Investigation Unit (Δ.Ε.Ε. Διεύθυνση Εγκληματολογικών Ερευνών – forensic division) as well as one Nissan NV400 for the anti-riotcops (M.A.T. – Μονάδες Αποκατάστασης Τάξης – Monades Apokatastasis Taxis) were ceremonially granted to the cops in front of their academy in Amygdaleza, in the north of Athens (autogreeknews.gr/nea/nea-tis-agoras-autokinitou/nea-nissan-gia-tin-elliniki-astynomia).

We chose this moment because it was in December 2008, when the assassination of Alexis by the cop Korkoneas in Exarchia, Athens, triggered a social revolt that was accompanied by a multitude of international attacks on the symbols of state and capital and their murderous functionaries.

11 years later, living conditions have not improved either here or there. Rather, the social war is intensifying worldwide. The gap between rich and poor continues to widen. The triumphant march of neoliberalism produces a mass of excluded people who are denied the possibility of social participation. Expelled and parked on the margins of the metropolis or in slums, they are declared enemies, who should be monitored and oppressed. Walls and fences, private security services, intelligent cameras and highly equipped police units are the clearest expression of an increasingly militarized territory in which, under the disguise of security, war is being waged against the poor.

New technologies and the associated digital access to our lives enable new and more subtle techniques of governance. The thousands and thousands of data that are produced every day are intended to make any action calculable and controllable. With Predictive Policing, the foresighted cop, a tool was created that sorts people according to stereotypes and thus creates the criminals of the future. Such technologies are embedded in the restructuring of cities into Smart Cities, the implementation of which companies such as Deutsche Telekom are constantly working on with 5G infrastructure projects or smart traffic systems, lanterns, waste management and much more. However, this is by no means to enable a better life for all, but to enable the totalitarian idea of comprehensive control of the city and its population through practical solutions.

The technological attack is so successful because humans are actually collective beings. Part of the neo-liberal agenda was and is the destruction of this very collectivity in order to reassemble it in line with the market through digital domination. Driven by the fear of being excluded, even outlawed, and by the supposed joys that Virtual Reality has to offer us, we ourselves weave on the net that encloses us. The state of isolation in the cities or the disregard of rural communities leads many into the arms of the constructed national community and therefore parties like the AfD get a influx of followers. Fighting the rise of fascism by integrating ideas of solidarity and collectivity into social struggles, is therefore certainly a task for the coming time.

As it is happening in other countries at the moment, the abolished leftist government in Greece has prepared the ground for the new rise of a right-wing conservative regime. The past phase of Syriza’s government should have clearly demonstrated to those in doubt that participation in power must fulfill the conditions of capitalist constraints and that no emancipatory project can stand on democratic parliamentary feet. To name these contradictions, to reject any domination by others, not to compromise and not to recognize the authority of a hostile system are part of the anarchist idea.

We feel connected with the rebels worldwide, who are currently in many different places in the world, especially where the state-social partnership is not developed to the smallest detail, those who let the sparks of resistance grow into a widespread fire of social uprising. While in Athens self-organized and revolutionary structures are being defended and state and capital being attacked (actforfree.nostate.net/?p=35838), we are fighting the same struggle here, in which we aim at the profiteers of capitalist domination. We do this with the consciousness that the infrastructure and the flow of goods are elementary components of it. We send our flaming greetings especially to those who fight against the regime of Nea Demokratia in Greece as well as worldwide to all those people who revolt against authority, are in prison for it or who have to flee. 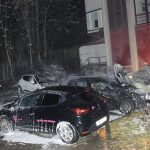 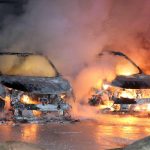 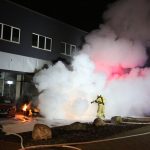