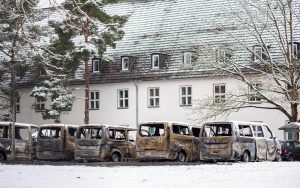 WE ATTACKED THE MURDEROUS DEPORTATION SYSTEM

the LAB is involved in organizing and carrying out deportations at its various locations.

on the premises of the LAB hannover-langenhagen, a central deportation authority (ZAB) is currently being established and equipped with more staff.

the aim of the policy is to carry out deportations faster, more efficiently and more consistently with the ZAB.

in line with the deadly pact that is being pushed forward at federal and european level for the expansion of fortress europe.

in the middle of the night or during the day from school.

our militant actions are a practical contribution to effectively obstruct the processes in the inhumane deportation system.

we stand in solidarity with refugees who come to europe and to germany.

we have respect for their struggles for freedom of movement

we have respect for their resistance against deportation attempts

through redistribution and counseling

by hiding from the immigration authorities

with demos and protest camps

through protective sit-ins against deportations

we have to build and defend structures of solidarity

AGAINST A POLITICS OF EXPLOITATION, EXCLUSION AND ISOLATION

TOGETHER FOR BETTER LIVING CONDITIONS FOR ALL 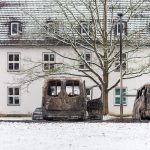 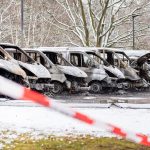 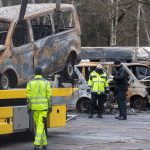 the arson attack on the vehicle fleet of the state deportation authority (LAB) in braunschweig worked as desired and needs no further explanation.

the arson attack on the building of the state deportation authority (LAB) in hannover-langenhagen unfortunately did not work as planned. therefore we want to make our action transparent and analyze our mistakes.

the attic is developed and a fire there would have caused considerable damage.
the building is not high.

since we also wanted to destroy the other floors of the building as much as possible, we placed additional incendiary devices on the first floor directly at the window under which the canisters were located. on the windowsill leaning against the window there were 6 bottles with a content of 1,5 liters of the same mixture. these bottles should guarantee the bursting of the window whereby the flames of the canisters should also destroy this floor

the detonators consisted of a stick of incense which, after a period of about 30 minutes, was supposed to ignite several fuses with its ember which then led into a small bag of black powder and other substances. it is important that the fuses protrude from the bag.

the press reports that the detonators did not work as planned. in our preparation this construction of the detonators was tested several times to ensure their function. therefore for us only one source of error comes into question.

the incense sticks became damp despite all precaution.

the time between the production of the detonators and their use could have been too long and the storage not dry enough.

the incense sticks could have become damp during storage causing them to go out before they could light the fuses.

the night was damp it was snowing. maybe moisture got to the sticks despite all precautions taken.

it was cold. condensation may have formed in the device we used to protect the igniters from the rain.

for future actions we strongly advise to exclude moisture on sensitive igniters even more reliably.

the entire preparation was of course carried out under elaborate precautions in order to avoid leaving any traces of dna behind. however, the loss of dna traces can never be completely excluded. therefore setting a functioning fire is all the more important.

we hope that in future attacks this error can be avoided.

we need to share our experiences of resistance in order to learn with each other
we must build and defend structures of solidarity. we have to use all forms of action to fight for a better life.

AGAINST A POLITICS OF EXPLOITATION, EXCLUSION AND ISOLATION

TOGETHER FOR BETTER LIVING CONDITIONS FOR ALL

we have found instructions at https://linksunten.indymedia.org/node/205560/index.html 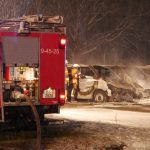