Cars of Siemens, Telekom and WISAG set on fire 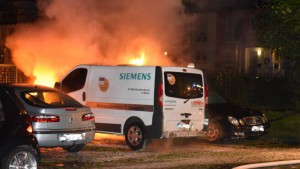 For Mónica Caballero, Nikos Romanos, Francisco Solar, Nikos Maziotis and all upright prisoners, for those who burn the vehicles of the prison-construction company Vinci in the streets of Paris and have celebrated the 14 July national holiday in their own way, for the untouchables that throw once again μολότοφ [Molotov cocktails] and stones through the streets of Athens and not let themselves be deceived by Syriza… and for ourselves.

That’s why we torched a vehicle of the surveillance company Deutsche Telekom in the Wedding district of Berlin on 11/6/2015;

we burned a van of the armaments company Siemens on the Stralau half-island on 13/7/2015;

and caused a vehicle of the security company WISAG in the Paul-Junius-Straße to burst into flames on 17/7/2015.

Fortress Europe will collapse only when the storm on the outer boundaries connects itself with the local, inner subversions, and these struggles correlate with each other.