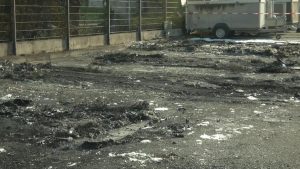 Last night we destroyed 6 Deutsche Bahn (German Railways) vehicles near Frankfurt West railway station. We are opposed to German support for the war of aggression by the Turkish government in Northern Syria as well as the ongoing raids and arrests of left-wing activists.

We set fire to six Deutsche Bahn vehicles used for making repairs. We deliberately carried out our action in a way that ensured there was no danger to anybody. Deutsche Bahn is a leading logistics partner of NATO. Dying and killing in the name of our ‘democracies’ is not an option for us. We will continue to side with the revolutionary forces in Syria and elsewhere.

Here in Germany there are enough reasons too, we do not even know where to start with this police state: the complete erosion of what once referred to itself as a constitutional state. Mass public manhunts. The raids against German technology associations because they have a donation account for a legal US email provider and for using an email address that was used to promote protests against the AFD! (Alternative for Deutschland, right-wing populist party)* Or the banning of Linksunten Indymedia. Or the arrests in the Rhine-Main area for alleged participation in the G20 protests. Or the searches in France, because those affected allegedly raised their arms at the G20. What a complete misunderstanding of every situation in the Schanze.**

Or the increasingly absurd reasons for banning the demonstration against more police powers in North Rhine-Westphalia because it entails “an immediate threat to public safety and order” as it “could be used as a protest against alleged police violence and/or police control”. How absurd that the legal radical left is fighting for more democracy and constitutional reforms in the remains of a supposed civil society.
When simple graffiti at an autonomous center generates weeks of discussion in the newspapers. But if nobody even begins to discuss the idea of bringing more freedom into play, then we know that there is nothing more to be gained from this society.

For us it is clear: the massive expansion of the so-called ‘security apparatus’ since 2001, which has only produced more scandals, such as their support for the NSU***, should not just be accepted. A society that is already attacking every form of dissent on such a massive scale leaves us no choice but to resort to actions like the one we carried out last night.

Solidarity greetings to all those who travel without tickets on the trains.
We wish all the prisoners a lot of strength and perseverence.
In particular, of course, those affected from the Rhine-Main area, and also those affected from the Rigaer Strasse, the Aachen bank robbery case and all the others.
In particular, the Turkish and Kurdish comrades who are once again more severely affected by the repression. Special greetings go of course to those who have managed to escape the grip of the state and are on the run. Hold on!

**Refers to the clashes that took place in response to the police violence in the Schanze district of Hamburg during the Hamburg G20 Summit.

***Refers to collusion between the security forces and the neo-Nazi National Socialist Underground (NSU) that was able to murder with impunity for 6 years.

Video in the corporate German press of the aftermath here: