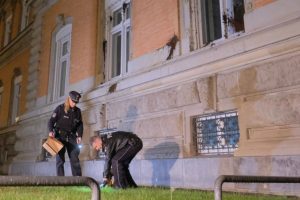 By early evening of April 26th, the criminal justice building (courthouse) on Sieveking Pl. was attacked in Hamburg. A burning barricade of tires was erected on the street, the facade and windows were damaged with paint and stones, and fires were set on a camera mast to destroy it.

In many places fighting individuals are currently facing court. Solidarity with the unrepentant and uncooperative prisoners. The G20 fighters in Hamburg, the accused anarchists facing trial in Belgium for rioting. The Russian anarchists who defy torture, incitement and imprisonment. The anarchists in Italy who spit in the face of ongoing repressive operations, solitary confinement, surveillance and long prison sentences. If fighting for freedom is a crime, then innocence would be the worst crime of them all. Solidarity means keep fighting!