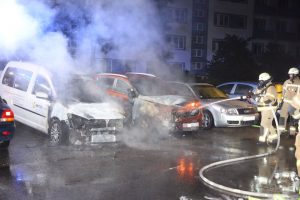 «Here, in the fire of direct action, was born the consciousness that we can win against them. In the flow of events of that time came the idea that action creates awareness – a thought that later became my guide during armed actions.» – Dimitris Koufontinas

Geographically speaking, you may be several hundred kilometers away, and politically there are differences between us in terms of organization and theory, but we are putting this aside. History was written by you and we don’t want to deny it. Your struggle and your will, your actions and your communiques may not be well known in the current German-speaking world. Therefore, it’s hardly surprising that the fires of solidarity have barely broken out beyond the Greek-speaking world. We want to change that and link the struggles that have always been waged.

You are currently on a hunger strike, in a critical situation in the intensive care unit. We hope not but we do don’t know whether this will be the end of a revolutionary period in your life. Nor can we gauge the impact on the other indomitable combatants of our era. But what we can tell you is that we forget no one, no matter how far the consequences of our struggle will go. Inaction would be a fatal sign and the end of any progressive organization via praxis and theory.

The determination with which November 17 spent 20 years fighting on the streets of Athens in particular is an inspiration to us today: attacking cops, state institutions and military infrastructure. We are far behind with our theories and analyses of social conditions here in the FRG (Federal Republic of Germany), if we look at the communiques of the movement in Greece at that time. But we believe we can understand some aspects of your past actions.

The 17th of November Movement emerged from the era of the so-called Metapolitefsi, the early years following the military dictatorship in the 1970s. The descriptions of that era can be compared to the 70s and 80s here in the FRG, but with far different actions and consequences. November 17 and other armed combatants describe these years in Greece as a time of rupture and permanent activity. Hardly a day without demos and rioting, full of assemblies and meetings. A phase of politicization for hundreds of young people, including Dimitris.

However, action in the streets continued to lessen over the years. The years of the Metapolitefsi also resulted in mass repression. There were also divisions in the movement, theoretical incompatibilities and for the founding members of November 17 came the need to go into hiding and take action from the underground. Many other clandestine groups were formed. Athens was full of safe-houses, stolen cars and weapons, but it was also full of secret agents and police operatives. November 17 remained underground for 2 decades continuously carrying out attacks. The groups of that era took revenge against the junta and those who tortured and oppressed the population during and after the Second World War. With their actions, the movement tried to gain the support of the people. The communiques of the group were discussed openly on the street. Much of the Greek populace developed a stance regarding the targets and analysis of November 17. There was widespread agreement, obvious joy and clandestine solidarity.

Their choice of targets was broad. There were targeted assassinations of torturers, intelligence agents and prosecutors; bomb attacks against embassies, MAT (riot police) buses, cars of high ranking politicians, corporate bosses and company buildings. It would be hard to summarize at this point or to formulate a complete analysis of the consequences of November 17. To date, there are many references from the Greek movement regarding combatants of that era who were executed by the cops or who are still affected by repression today. For active solidarity we think it is important to remember the names of those who participated in armed movements.

What impresses us deeply, Dimitris, is your decision not to flee repression after all the years of attacking, but to take full political responsibility for the targets of the organization and your actions.

We send you strength and anger during the final stages of your hunger strike.

As a sign of our burning solidarity with all the indomitable fighters, whether they are on the street or in jail, we set fire to a Kötter Security car on the night of May 17th. It is no coincidence and not due to our selflessness why we attacked this company. Kötter Security is a private security company that is one of the biggest players in the industry in Germany. Kötter Security carries out war against humanity and freedom on behalf of and in cooperation with the ruling classes.

As well as providing security services and installation of surveillance technology, since 1993 one of its pillars has been staff support in Knästen prison. They provide their services to control all aspects of prison life: they carry out access control and prisoner transport, cook the prison meals, manage the prisoners purchases and phone calls at exorbitant prices and force the prisoners to work. They even see themselves as experts in recreational activities as well as the medical and psychological care of the incarcerated.

They also boast about having founded the first private jail in the FRG in 2009 in cooperation with the company Bilfinger – «from the planning to the construction..right up to the operation of the prison».

«The war, which springs from this social contradiction, has been going on for a long time. Sometimes it is visible, sometimes invisible, sometimes it wears the mask of the constitutional state, but other times it shows its real face. This war will exist as long as the classes exist. When humanity finally emerges from its barbaric prehistory – war, misery, illiteracy, plunder – when humanity finally passes into the realm of freedom, equality and unhindered development, when humans regain their humanity, only then will life become of real value». – Dimitris Koufontinas

Solidarity with the 7000 fighters on hunger strike!