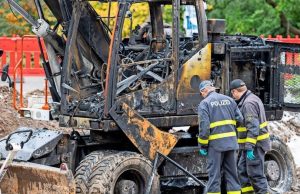 During the night of October 11th, we set fire to two Eurovia Vinci excavators. Vinci, as a global company, has shown many times in the past and in the present that it apologizes for NOTHING and that it is ready to accept any order, no matter how dirty.

This can be seen in many examples, especially in the construction project of an airport near Nantes (France), where the now evicted ZAD was located. Here Vinci, in cooperation with the French government, want to clear 200 hectares of forest to build the third largest airport in France. However, this project was prevented by militant and civil society protests. Vinci is also involved in the construction of prisons making them a part of a system of domination and oppression.

This domination was opposed by some determined people at the G7 summit in Biarritz. Despite the military isolation of the city, they succeeded in penetrating the city of Bayonne north of Biarritz and letting their rage run free. This action resulted in a total of 68 arrests, 38 of whom were remanded in custody.

Vinci’s machinations are against our idea of a just and liberated society, which is why the company and its infrastructure were and will remain our targets. Look around – there are many Vinci construction sites.
Fire and flames against repression!
Solidarity with the G7 prisoners and the Autobahn 3!
Solidarity with the Park Bench 3!
Freedom for Loic!
Freedom for all prisoners!