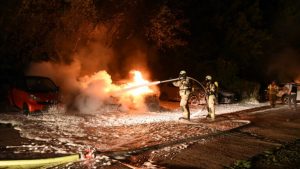 During the night of Saturday, September 28th, we lit several fires in the parking lot of a jeep car dealership in Berlin-Lichtenberg. Happily we sail on the rising wave of worldwide resistance against the destructiveness of capitalism and its devastating consequences for the earth and its inhabitants. May the resistance act with the consciousness of the necessity of a revolutionary upheaval instead of advocating a green, constantly reforming capitalist system.

This permeates every are of our lives and transforms personal relationships and thoughts into commodity values. The fact that the network of domination functionalizes all of us as bearers of it does not mean that there are no special driving forces for the misery. It is the rich in particular who, with their egocentrism, give everything to ensure that things go on as before and that patriarchal rule is expanded. Smarter, bigger, faster. They drive off-road vehicles in the city, expand the electricity and resource-consuming Internet of Things with their palaces and their smart devices, jet around the world and bank on green – by shopping in the organic market or at the ballot boxes. Closely connected with the further spread and violent enforcement of capitalist ideology is gentrification as an attack on social and resistant sections of society. All the more obvious is the contrast between those who are willing to take responsibility for the aggressive reconstruction of the city and those who stand up for the ideas of a different, collective, dignified and free life. We want to sow fear in the minds of the former and make them feel the consequences of their actions. To rebel with the others.

We torched top of the range SUVs of a company that makes money here in Berlin from the status addiction of the rich. Jeep builds for the civilian market more or less exclusively this deadly technology, which weighs twice as much as a normal car, which eats twice as much fuel to produce twice as much power to generate twice as much prestige in the broken circles of their clientele. We don’t want to judge the exact circumstances, but the deadly crash a few days ago in Berlin, where four people were crushed by one of these SUVs, is symbolic of all the madness. Not to forget, of course, that the American company Jeep has its origins and a significant market share in the military sector. To this day, Jeep stands for off-road drives by mercenaries in enemy territory on behalf of an aggressive market economy.

Four SUVs and five other cars of the dealer will remain in the parking lot today. Even if we are getting a bit closer to the end of SUVs today and a little less CO2 will pollute the atmosphere, much remains to be done.

Actions such as these do not appeal to the rationality of the elites and are neither an attempt at resocialization nor are they intended to draw up a list of demands. It is far from our intention to reform capitalism. Rather, we consciously attack it and bring insecurity into the lofts of the owners of such vehicles and other riches and also aim at the indifference of those who, without being rich, have aligned themselves with the system.