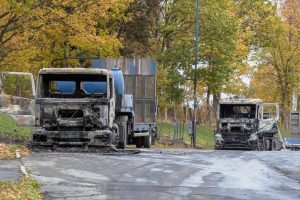 The existence of prisons serves the conditioning of humans, the administration of misery, the destruction of rebellion, the torture of bodies, the blunting of souls. For a prison society such as ours, it is unbearably necessary to lock away the misery produced by the capitalist system. When you are born in poverty, the threat to end up behind bars is significantly higher. By enforcing judgments of a judiciary, which judges in the sense of the upper classes, prison keeps the wheels of oppression running. Therefore the fight for social justice must always be a struggle against this incarcerating mentality and the existence of prisons. The fight for the liberation of all humans has to abolish the prison society.

For this reason we went out in the night of the 4th of November and struck twice: Once in Rodewisch (Saxony, Germany) and hit the road construction company VSTR GmbH and twice at Hentschke Bau GmbH in Bautzen (Saxony, Germany). At both locations we set heavy construction machinery on fire. We consigned two trucks, two excavators, one van and one tractor unit to the flames. The estimated material damage caused is in the six digits. Both companies have taken orders for the new giant prison project in Zwickau-Marienthal (Saxony, Germany). There they are diligently working in this bleak area building a big concrete wall surrounding the new prison territory.(1) After the successful attack on the construction site in August 2019 we now followed the call of the comrades. The accomplices, who named themselves “Autonomous Commando Thomas Meyer-Falk”, have already outlined background information concerning the construction of the new penal institution in Zwickau-Marienthal and the machinations of the company Hentschke Bau in their communique. We would like to link their passionate words here. (2)
We want to point out, that the participation and enrichment by supporting the prison industry is not rewarding. Furthermore we recommend not to participate in the cruel business of the prison system. It could raise great anger in some human hearts…

Prison is the embodiment of isolation and exclusion from society. By this, the “problems” of capitalist society are partly pushed out sight from the public. The misery, the poverty, which drives people to criminality has to be administered. Be it through chasing the homeless or begging people away from the city centers, or through incarceration of unpleasant individuals. The public doesn’t need to care. Once these humans are locked away, they are sorted out, send to banishment, are made invisible, are forgotten.

This is one reason why the majority of prisons are located in bleak and remote areas. These giant, grey buildings should preferably not be noticed by the public. They should not recall that behind these walls there are humans rotting, not recall that they might be responsible for their suffering. Through this the society refuses the discussion, if we can talk about justice here, with this judiciary and its executors ruling. Within the past years we observed that the prison issue lacked visibility, even in radical left contexts. This action shall be a contribution to emphasize the importance of a struggle against prisons and the prison society.

We have to expose prisons as what they are: An instrument of power. A tool that serves the emperors, to protect themselves against the people. Ever since their main function is punishment, even though they name it re-socialization. Many imprisoned people are rejecting the image of the re-socializing effect of imprisonment. They complain, that the contrary is the case: “The reality has proven, that most prisons are not working in cooperation with, but against the imprisoned and the goal of reintegration.” (3) More than 53.3 % of the 50,957 imprisoned people had to serve sentences before.

The imprisoned H. Deutsch is writing, that nothing seriously changed since the reformation of the German penal system in the 70s. The conceptual structure remained, there “had to have happened a complete exchange of the prison guards, as well as the prison directory”. The fairytale of re-socialization proved to be a masquerade that justifies imprisonment in front of the public. Hidden behind this dogma, the cruelties of the former penalty institutions still exist, going along with the impacts on the imprisoned.
So for example:

– mental (up to 88% of the imprisoned) and physical illnesses of the imprisoned based on their incarceration (4)
– insufficient medical support (5)
– The white torture, named solitary confinement
– forced labor, payment below minimum wage, no possibility to save for pension funds
– unwholesome diet and overpriced food within prison supermarkets
– sanctioning of contact and complete surveillance of communication
– Bullying by the prison guards
– up to the post-penalty preventive incarceration possible until death

We are supporting the struggles of the imprisoned for better conditions within detention and the granting of their human rights, up to the demand to demolish every prison. The concrete claims for better conditions contain the abolishment of solitary confinement, of preventive incarceration, of forced labor, the advent of the minimum wage payment and the possibility to save for pension funds, as well as a sufficient medical care system.
Putting aside the main purpose of prisons, the oppression of individuals for a seamless function of capitalist power, we still face a society that demands prisons for supposed security. But prisons will never solve the problems of society. Even inhuman violence has its roots in our socialization, in our social environment, in our experiences. If our goal is a violence-free and liberated society, we have to rethink the way we interact and renew society. Only a liberated society will be capable of solving the prison problem.

We hope that our flames could warm all those who linger within cold prison walls. May our fire be a small light to those who are facing dark times. For Loic, for the Park Bench 3. For Lisa and Thomas. Your struggle is inspiring us, it was part of our motivation for this attack.

Freedom to all prisoners!

Militant Cells of Fire Against Prisons! (A) 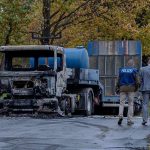 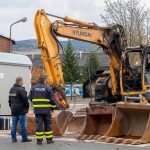 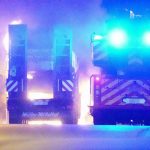