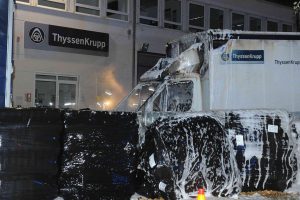 War Begins Here – Attack Arms Corporations
During the night from Sunday to Monday we penetrated the grounds of Thyssen Krupp in Berlin Tempelhof and torched three trucks.

Thyssen Krupp is mainly active in steel production. With its subsidiary “Thyssen Krupp Marine Systems”, the company is also involved on a large scale in the war industry. With the construction of warships, the company earns several billion euros annually. Their ships and submarines are exported all over the world, one of their biggest customers being the Turkish army.

Germany and Turkey have been business partners in the arms trade for many years. Exports to Turkey are are higher than they been for more than a decade, 1/3 of all German arms deliveries are already going to Turkey. So the arms export halt, which the Federal Government imposed in October, does not help much at all. All previously approved exports may still go ahead and so the army is further supplied with weapons until the end of the year.

We welcome the increase in anti-militarist actions since the Turkish state waged war against Rojava with German weapons. It can also be observed, however, that with the decline in media coverage of the war in Rojava, that the frequency of action here is also declining.

On the one hand, would also like to add that Germany has also been waging war in other regions for years and that the German arms industry supports regimes all over the world. The alleged halt of German arms exports is just another smoke screen for us, which will not light the way for us. In the Yemen War, for example, all parties to the conflict continue to be supplied with weapons despite the suffering of the population, which has persisted for years. Saudi Arabia, against whom an alleged freeze is already in place, also receives weapons from German industry. Arms bans are ignored or circumvented by building “only” individual parts on site and then sending them to European partners in order to complete the complex weapons systems there.

On the other hand, the Turkish state and other nation states decide when the next escalation, when the next war, when the next ethnic cleansing is on their murderous agenda, when it seems opportune to stage elections and when media coverage should focus on the war in Syria and Rojava. However, a radical anti-militarist perspective should not depend on these decisions. Otherwise we will remain trapped in reaction and degrade ourselves to the defenders of the existing conditions. Militarism, capitalism, patriarchy and racism are conditions that must be attacked at all times.

We must take disarmament into our own hands, and what we destroy here can do no harm elsewhere. Arms manufacturers and suppliers must not lull themselves into safety here. There are many ways of attacking them. We welcome a variety of methods. Be it direct sabotage, the blockades of arms companies that have taken place in recent months, or counter-information and public relations work, as the “Disarm Rheinmetall” campaign has been doing for some time now.

We send solidarity greetings to the Park Bench 3, whose trial will most likely begin this year, and to Loic, who has already been in custody for over a year in Hamburg.

Fire and flames to the prisons and weapons manufacturers. 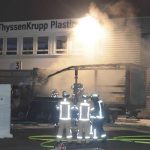 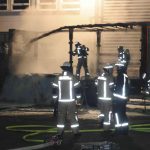 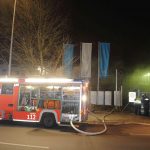