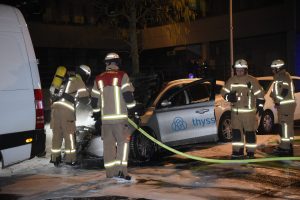 During the night from the 30th to the 31st we set fire to several vehicles of the armament company ThyssenKrupp. With this action we show our solidarity with the struggle of the self-defense forces of Rojava against Turkey.

Since October 2019, the Turkish army and its jihadist allies have been engaged in a new phase of the war against the Kurdish self-defense forces in Rojava (northeast Syria). This attack is aimed first at the population of Rojava and the project of Democratic Confederalism. But it also affects us internationalists, because we feel connected to the values of grassroots democracy, ecology and gender liberation.

The genocidal aggression of Turkey is not alone. On its side are the imperialist NATO states and the global fundamentalist Islam. And German big business is also profiting strongly from the war.

The German steel producer ThyssenKrupp is at the forefront. The company, which already supplies the German armed forces, is now selling billions of dollars worth of armaments to the Turkish military. We took this as an opportunity to consign several of the group’s company cars to the flames on the night of the 30th to the 31st. With this action we are making our contribution towards depriving ThyssenKrupp of its profits from the war.

With this action we are also sending a sign of solidarity to those arrested at the Linksunten demonstration and to the queer-feminist housing project Liebig34, which is threatened with eviction. Your resistance gives us strength. 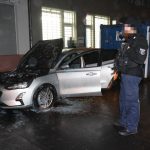