Browse: Home / Color and stones against the AWO headquarters

Color and stones against the AWO headquarters 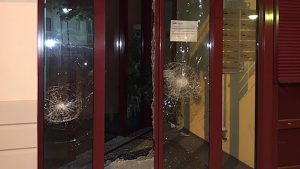 #shutdownlindenstraße
Color and stones against the headquarters of the AWO in Bremen
Attack racist and inhuman conditions and bring those responsible to justice!

The accommodation in mass housing, the negligent endangerment of hundreds of refugees by the Covid-19 virus and politically calculated disinformation of the public are unbearable. We aggravate the conflict between the inhabitants* of the Landesaufnahmestelle (LASt) in the Lindenstraße in Bremen-Vegesack and have therefore attacked the headquarters of the ‘Arbeiterwohlfahrt‘ (AWO) with paint bottles, fire extiguishers filled with paint and stones.

A story of responsibility and racism

The AWO in Bremen runs the Landesaufnahmestelle (LASt) for refugees in Bremen on behalf of the Bremen social welfare authority. Neither the Sozialbehörde (social authorities) nor the AWO took appropriate consequences from the infection of over 120 residents* with the Corona virus for which they are responsible. Instead, the conditions for the inhabitants are played down, belittled or denied. All the measures taken so far were long overdue and have only been taken under pressure from the protesters and the associated public. We‘ve seen this all before!

The LASt was a shit place long before the Corona crisis! Mass housing itself is inhuman and represents the way a capitalist and racist state deals with refugees.

The closure of the camp in Lindenstraße is something that residents* and activists* have been demanding for a long time. Even the predecessors in Steinsetzerstraße or other mass accommodations were repeatedly denounced or had to be closed, partly because of inhumane conditions.

The outbreak of the virus in Lindenstraße has dramatically worsened the situation. Living in quarantine with several people you don’t know in a room without a ceiling and without being able to open a window. Not to mention the sanitary facilities and the canteen (documented by photos and videos of inhabitants). Deliberate disinformation, racist harassment, criminalisation and repression.

The fact that even in times of a highly contagious virus, the control and management of refugees is more important than their health shows that – in case of doubt – they are prepared to accept people dying. Mass housing is the continuation of the European border regime, to which people fall victim every day.

We express our solidarity with the protesting inhabitants* of Lindenstraße. When people in camps set off the fire alarm or start fires and defend themselves against the security staff, it is an act of self-empowerment, probably also out of desperation, but certainly in confrontation with those who are (vicariously) responsible for the miserable conditions in which people are forced to live. It‘s a logical consequence of the fact that previous protests have only been answered with ignorance and repression.

What does the AWO say to this?

What does the AWO, operator of the camp, say about the ongoing protests? „Facts instead of fake news“ is the title of the charity’s statement and rejects all accusations. But this is nothing new. For years, the AWO Bremen has, for example, been running the so-called „return consultation“. Here refugees are put under so much pressure (basically by using blackmailing methods and a lack of prospects) that they prefer to leave „voluntarily“ before being deported.

The statement of the AWO on their homepage, which raves about “ … solidarity, tolerance, freedom, equality and justice“, is not worth the paper it is printed on.

In terms of social work, the AWO is an influential and powerful company in Bremen and elsewhere, making money by managing and „providing care“ for people. Especially as a broadly based welfare organisation, which is strongly intertwined with ruling parties (a large part of the AWO employees* are active members of the SPD – the social democrates party), its easy to earn state money for bad work or even no work at all. A sad highlight in the history of the AWO are probably the massive cases of fraud and embezzlement from the state of Hessen, which were recently uncovered. [1]

Of course, at this point the AWO is only representative for the racist and inhuman structures we live in. This however does not mean, that the company bears no responsibility for its actions. There would be room for improvement, if one wanted to meet ones own (professional) demands and standards. For example, not to accept a job by the state, because of course this can only result in shitty conditions for the people who are ‘taken care‘ of there. With power comes responsibility, which the AWO does not even want to meet.

Europe is waging war against refugees. Institutions such as the AWO are an essential part of the racist policy of deportation and isolation.

Broken glass and paint on a house wall seem a legitimate angry sign for us to convey that we do not agree with this policy. Let us increase the pressure furthermore!

Solidarity with the residents* of LASt Lindenstraße and all other refugee accommodation.

There is no appropriate refugee accommodation in the wrong border regime!