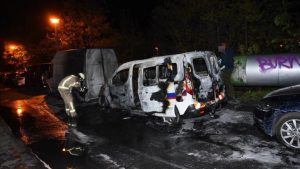 Practical solidarity with the defendants of the trials in Hamburg and the rebellious prisoners.
The proceedings concerning the G20 in Hamburg are continuing, the Park Bench 3 proceedings are continuing. The vehicles of the prison profiteers burn with a crackling sound during Berlin’s Corona Nights. This is the least that can be done, considering the riots in many prisons around the world in recent weeks:

On April 18th, a GA Tec van was torched a Falkplatz in Prenzlauer Berg and 3 days later a Eurovia Vinci vehicle was torched at Lichtenburg station. GA Tec is owned by the Sodexo Consortium, operates private prisons in England and is part of the deportation industry in Germany. Eurovia Vinci builds prisons and other humane projects and operates Toll-Collect, a private surveillance agency. Both companies are regularly attacked around the world and therefore offer themselves as sustainable targets.

Anonymous authors correctly recognized in the paper “A few thoughts on urban policy in times of technological attack” – Autonomes Blättchen #40, that different cities are competing with each other for locations for new technologies and the corresponding image. Furthermore they want to determine further the practical approach and suggest focusing the resistance on individual actors. Specifically they want to oppose Tesla, Google, Zalando and Amazon. One strength of the campaign against DHL was that their vehicles were parked everywhere. Even in the campaign against Castor Transporten, it was easy to find DB and Vattenfal vehicles. The weakness of militant campaigns has always been a creeping end before the enemy kneels; with a few exceptions (NOlympia 1993 or Frank Henkel 2016). Campaigns end because targets become scarce, other issues become more important, or because it seems too risky.

With the tech industry as the primary field of intervention, the limits of militant small groups are quickly reached, those of open groups are not. The addition of different levels of resistance requires self-confident open structures that do not distance themselves from attacks. And the readiness for a continuous but asymmetrical practice of clandestine connections. Projects such as the Berliner Liste a few years ago, can be continued endlessly and are always topical. The trick is not to get bogged down by arbitrariness in the selection of targets, or, as the above text puts it, not to be target-oriented, nor to become predictable.

The image of the city of Berlin suffers when companies cannot give their employees the vehicles they need to get home. Insecurity is our factor. Many sparks increase the chance of a larger fire. The tech industry can only remain virtual without the companies building their temples, guarding them, separating the superfluous. So our proposal is based on an easily imitated riotous arson campaign against the whole range of urban political actors to attack everything that is necessary for the functioning of their kind of city in accordance with methods that are unpredictable for them.

Freedom and happiness for the prisoners – decay for the profiteers of the prison society!