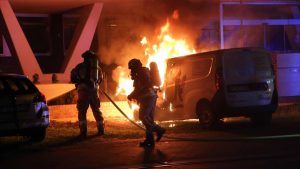 Because we do not accept the repression!

During the so-called Corona Pandemic the control apparatus tries to reach every corner of our lives. Social relations, contacts, movements – everything is under state control. Those who live on the street, who have no apartment, no penthouse, no place to survive this virus in domestic quarantine, are most at the mercy of the brutal violence of the state and private security authorities.
Instead of cops, public order and fines, there is a need for safe retreats and a good health system for all.

With this action we attacked a small wheel of this system:

STOP THE VIRUS OF CONTROL!

As a private security company, WISAG is a group that benefits from surveillance, evictions and control.
In Berlin, they work in cooperation with the BVG [Berliner Verkehrsbetriebe – the main public transport company in Berlin] to ensure that more than 3,000 people go to prison every year for so-called fare evasion. Because these people had too often (3 times) not enough money for a ticket, they have to sit in prison (which costs the state far more than free public transport for economically marginalized people).
By the way: especially in Covid-19 times, such custodial sentences – where one pays with the deprivation of one’s freedom for one’s poverty – are suspended for minor charges. Why not right away?!

Furthermore: As security personnel at airports, WISAG is (partly) responsible for deportations and their institutionalized racism.

And also in the Rummelsburger Bucht WISAG is responsible for the eviction of the homeless people living there, so that real estate mogul Padovicz can make even more profit from this city and avoid a luxury building being turned into another free space. Whether this actually happens, we will see.

The sexist logo on the car, which proudly represents the exploitative conditions for women in the cleaning sector and the brutal masculinity in the so-called security sector, burned excellently!

This is our reply to your prisons, your repression and your surveillance!