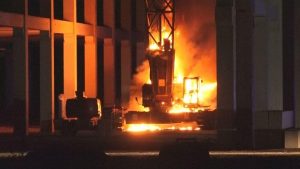 Amazon construction site sabotaged!
At the end of last year, Amazon concluded the purchase contract for a commercial site on the A27 motorway in Achim. Anyone who goes there now will see huge cranes and other heavy equipment towering up into the air, pounding a gigantic hall of steel and concrete out of the ground. In the future, 2,000 people will be working under constant surveillance in a windowless hall in a place that was a wasteland just a short time ago, only to be replaced by robots. Employment offices are rubbing their hands that they can force masses of people to work at Amazon.
The new logistics centre is important for Amazon, so that, together with the much smaller distribution centre in Bremerhaven, it can supply the Bremen/Oldenburg/Bremerhaven area more quickly. The state of Lower Saxony is bearing the costs of transport connections and other infrastructure, thus joining the degrading practice by which cities and local authorities around the world outdo each other in giving gifts to the company.

We have decided that the construction will not go off without a hitch. In the early morning hours of July 30, 2020, we lit a fire on the construction site with 20 liters of a mixture of gasoline and diesel and several incendiary devices and set fire to a 40-meter-high crane. Instead of surrendering to the seemingly inevitable, we decided to become an incalculable risk to cybernetic capital in the blind spots of the Bau-Watch cameras with their piercing green light and outside the gaze of the securities who have to guard this construction site day and night.

Rule, surveillance and the exploitation of people are increasingly organized by the intervention of large corporations. Their digital networks, algorithms and technologies have become indispensable and permeate all areas of our lives. They influence our lives, our everyday life, our feelings, our thinking, our communication and our social relationships. The technological attack thus also targets everything that has so far resisted capitalist exploitation. A dystopia that is striving towards its completion: Infinite amounts of data are collected, selected, evaluated and analyzed, guaranteeing a complete insight into social and societal processes in real time. These are to be controlled in order to be able to predict developments and (in)regularities. Small changes and shocks in the fragile economic market can affect one’s own supremacy in the race for the greatest profit.
The current technological development paves the way for a smartification of the whole life. The economic success of IT giants such as Amazon, Apple, Google, Facebook & Co. naturally includes the optimization of wage exploitation. At the same time, algorithm-based crime prevention promises smooth governance and rule and administration, usually in a completely invisible, decentralised and even environmentally conscious outfit. Here are some examples.

Amazon is spreading to all markets and into all areas of life. Investments in the so-called Share-Economy run parallel to the establishment of a health insurance company. The entry into the health market was and is promising.
More favourable tariffs or bonuses for insured persons serve here as an incentive to reveal as much as possible (e.g. via a Smart Watch) about themselves and their behaviour. Information on blood sugar levels, the number of steps per day and alcohol levels is passed on directly to the health insurance company via digital devices. Smokers, for example, will have to pay a higher health insurance premium. Everyone is responsible for their own health. The solidarity principle of health insurance companies is thus completely undermined. Business in the health sector is now the second largest source of income for Amazon.

Amazon’s facial recognition software “Recognition” is a racist and unreliable surveillance technology, used in particular by the US police. In practice, especially with BPOC (Black People of Color), the results are often falsified, with the consequence that they are criminalized, i.e. controlled, arrested or imprisoned much more often. In the USA, more than a thousand police stations have a partnership with the Amazon corporation and use its surveillance technologies. In Germany, the use of facial recognition systems was initially suspended due to technical problems and data protection hurdles and its use by the police was postponed for another year. In the USA, additional police stations enter into partnerships with Amazon on a weekly basis.

If we want to fight the technological attack, we must sabotage ourselves!

A disempowerment or even socialization of the big tech companies and global players like Amazon, Apple, Facebook or Google seems hardly possible. We think it is wrong to reform or make these companies “socially acceptable”, because their power is too great and their ideas and images of humanity are diametrically opposed to our concept of freedom. We consider the desire to illuminate and control every human thought, every social relationship and even the smallest step in work processes to be dangerous. If these smallest particles are then to be controlled and adapted to a given exterior, violent domination is in its purest form!

Nevertheless, we are of course aware that we too and our everyday life are structured and in many cases thoroughly digitalised by technologies.
A large part of radical left-wing contexts is organized through messengers. If things you want to buy are twice as expensive in a shop, then you order them from Amazon and use the exploitative structure behind it. Pickers, packers, suppliers also work for or because of us under miserable conditions. Not to mention the places of production…
We think it is important not to underestimate our own role and responsibility in criticism and not to deny our own interdependence and dependence. We are part of this society and thus also part of the problem. This is nothing new.
But it is precisely for this reason that it makes sense to act and to shape things ourselves. Pausing, being off and sometimes throwing sand into one’s own gears is just as much a part of it as the destruction and defence against technological attack. If we talk about the destruction of the technological attack, we must also sabotage ourselves!

“CRITIQUE OF TECHNOLOGY IS CRITIQUE OF DOMINATION AND CIVILISATION – NOT PRIMITIVISM!
We do not make the ridiculous judgment that technology is “bad”. Out of which – anyway historically conditioned – ethics then? We say it is violence and social war.”
(from “digital self-determination” by the editorial collective capulcu)

Our attack from outside

We know that our attack is only a (small) sabotage, which delays the construction of the Amazon logistics centre a little and increases the costs by a few hundred thousand Euros. But we also know that many will recognize themselves in such an act of resistance against the technological attack on our bodies, our work force, our leisure time and our relationships. In this recognition, in the anger, in the determination and the drive for action lies serious potential.
And because we also recognize ourselves in the attacks of others, we would like to conclude our communiqué by taking over part of a text in which a coordinated attack on Amazon vehicles, the Amazon Development Center Germany in Berlin-Mitte and its boss, Ralf Herberich, was announced on February 1, 2019:

“The miserable working conditions and Amazon’s “innovations” in the field of precarious employment are well known. In the logistics centers, known by the Group as fulfillment centers, there is permanent control and “optimization” of processes. From the monitoring of hand scanners to mutual evaluation and the deliberate disregard of safety standards, enormous pressure is placed on the workers. So it is often not even worthwhile to go to the break room during breaks and extending breaks is usually out of the question for pickers and packers. Every move and every step in the warehouse is precisely monitored.
Most of the 200,000 parcel deliverers in Germany also work for Amazon under lousy conditions for various (sub-)companies, more or less indirectly, but in any case very flexibly. Amazon Flex, is the name of the app with which you can hopefully land the next delivery order as a bogus self-employed worker. The route to the destination address is then specified.
At Amazon Mechanical Turk, the first clickworking platform, all labour rights were circumvented. On the platform, so-called micro-tasks of e.g. 10 cents each are assigned. When stupidly sorting out inappropriate content or writing product reviews, screenshots and work pace are then taken.

Meanwhile, the trade union ver.di is conducting an unsuccessful collective bargaining dispute for the 14,000 workers from 12 logistics centres. Despite “union busting”, immense obstacles to organisation and high fluctuation of the workforce in the warehouses, on the bargain day “Black Friday” 2017, according to ver.di, about 10% of the workers at seven German warehouse locations and one each in Italy and Poland organised a strike. Solidarity-based people and groups tried to block the Amazon Prime logistics centre on Kurfürstendamm in the centre of Berlin at the same time, unfortunately without causing any significant delays.
Ralf Kleber, head of Amazon Germany, once claimed: “When there is black ice, we itch much more than when ver.di calls for industrial action”.
He was right, but why can (local) strikes no longer exert the desired pressure? The automation of load distribution between warehouses across national borders makes it possible to absorb interruptions, such as strikes, to such an extent that delivery times are kept as short as desired and any impact of the strike remains almost invisible to the public. The disruption of smooth operations is made difficult or even impossible here by “intelligent” algorithms. Amazon is a pioneer in the field of this automation, which here represents a direct attack on the workers and their possibilities of regulated labour struggle. But despite and because of these worrying developments it is important to take the initiative. The fact that previous strikes have not caused serious damage to such companies does not make them superfluous. It rather shows that it is necessary to fight with greater vehemence and more “radical” means, that could mean for example more direct actions, wild international strikes and for that reason to further advance international networking. Sabotage and militant interventions (from outside) or the idea of a European general strike as proposed by the Spanish comrades (https://makeamazonpay.org/2018/05/17/675/) could dock to this as well as ideas for sabotage of the algorithms or the Internet of Things by misplaced packages or similar. A combination of traditional and new means against the new digitalized world of work is probably most promising in the (labour) struggle against a disruptive technology company like Amazon”.
You can find the whole text here: https://chronik.blackblogs.org/?p=9514

With this in mind, we greet all those in Berlin who fight against Amazon Tower, who prevented the establishment of a headquarters in Queens, who set fire to the local distribution centre in Staffordshire three times in a row on Black Friday, who fight the Cyber Valley project in Tübingen…We greet all those who set out at night to sabotage Amazon lockers, delivery trucks, construction sites, offices, drones and data centres. In the same way we greet all angry workers who do not like unsustainable working conditions and certainly do not allow themselves to be integrated into the gigantic cybernetic apparatus of global, digitalized capitalism.

And there is one more thing we want to say: Whoever decides to take action will find that some things that seem indomitable to us in everyday life can be seen up close, and many sore points are exposed to our courage and are defenceless. As always, the old rule of the burglars applies: Always check first if the door is unlocked…

A hug to all prisoners and to all who are affected by repression, surveillance and house searches.