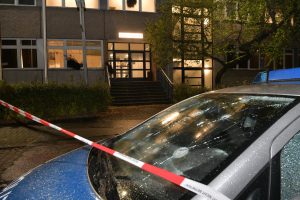 “Life is a window of vulnerability” – Donna Haraway
On the night of October 7th we attacked a building of the Directorate of Riot Police Operations in Sewanstraße in Berlin-Lichtenberg. We locked doors and gates from the outside, smashed windows with stones and color bottles, rendered a patrol car unusable and overturned the cops’ private motorcycles. With this action we want to express our solidarity with the Liebig34, which is to be cleared in 2 days.

We have thus hit a small window of vulnerability in the local police state and have come a few thousand euros closer to the €34 million bill. The Directorate of Operations was instrumental in clearing the Syndicate and will again take a leading role on October 9.
“Our task is to make trouble, to stir up potent response to devastating events, as well as to settle troubled waters and rebuild quiet places” (Donna J. Haraway).

The evacuation of Liebig34 and the logic of the system it follows mean nothing but devastation. Our task is to relate to it: to create unrest and create alternatives. Liebig34’s struggle against marginalization and oppression is a struggle that many people within this system are exposed to. Liebig34 has created spaces to collectively recover from this and at the same time stands in loud and visible opposition to the devastation of our bodies, our souls, the house and the neighbourhood.

Therefore, October 9 is not only about the Liebig34, but about making visible the devastation that this system produces and the resources that are mobilized to enforce devastation. While it is Padovicz (owner of Liebig34) who gets police protection on the 5th floor of his hotel on Ku’damm, he evicts people who are regularly exposed to misogynist, homophobic, trans-hostile and racist violence. Whoever talks about violence when attacking police stations has never experienced or understood the violence of patriarchal rule!

The cops claim that they must be afraid. Yet it is they who, as Robocops with more than 5,000 goon-men, heavily armed anti-terrorist units and the establishment of a “Red Zone” on Friday, want to clear a queer-feminist house project and stifle resistance. For Berlin, it will be the most expensive and most elaborate eviction since 1990, all so that the state security apparatus can once again stage its legitimacy – on behalf of capital.

It is not the hate for the system but the solidarity with each other that keeps us together and has always made us resist. The Liebig34 struggle has united many people behind it – neighbors, queer feminists from science and literature, militant anarchists and other tenants are behind the house. We feel like a small part of this solidary mass. Let us be strong and at the same time vulnerable, no matter what happens! Let us move into troubled waters to build calm ones.
On the street on 9 October – making eviction a disaster!
Queerfeminism – everywhere & always! 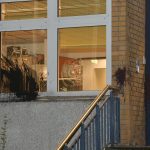 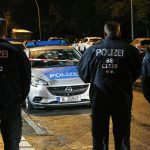 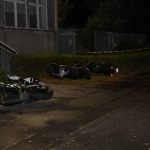