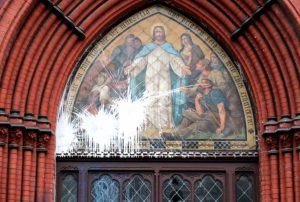 We attacked an Lutheranean Church in Leipzig to start the campagne mondays for moria. We attacked with stones and paint.

The Situation at the european borders is disastrous. The condition of the camps are inhumane. We all know that. The problem isn‘t necesserely that there are no reports on how bad europe treats migrants in Greece, Bosnia or anywhere else, although many people still have little knowledge about the suffering but thats more because of their ignorance for what migrants have to say about their suffering.

The politicians aswell as the voters of the conservative and more socialdemocratic parties know how bad the greek cops or the turkish regime treat migrants. They want it that way. They don‘t want to see or do the dirty work that keeps their illusion of the european union alive. The EU is not some freedom granting project for peace. It is a neo-liberal economic union from european white christians for european white christians.

This ignorence of these acts of violence on the baltic sea or the tent-cities of Kara Tepe is part of the EU system which means every vague promise from our leaders will always be empty words as long as we don‘t force them to change something.

The time to act is long overdue. We have known for a long time. We could write many pages about the many injustices but many peaple before did this better and more informed. The problem we‘re facing is, that nobody listens to them.

If we look at past movements that were able to celebrate at least some victories, even if the change wasn‘t too radical, we see some campagnes that got a lot of attention. Fridays for Future started with one girl in Sweden and became a worldwide phenonemon. The squatting of houses has a long tradition in the fight against gentrification and property itself. Demonstrations of every kind, where the rules of protesting in complete non-violence were broken even in slight ways, get more attention as the more friendly and most times bigger conterpart.

Our point is if you attack the capitalistic order you get attention because they try to quiet you down. They want to send you back to school, evict you from their empty houses and put you in jail for pushing a fully armed riot cop. They try to shut you up, to protect their beloved capitalist order but the attention you attrack from them let people see your ideas and reasons for attacking the order in the first place. The interesting thing is, when enough people share your ideas like wanting to do something against climate change or gentrification, they can‘t just label you as terrorists or hooligans. Instead they have to actually deal with you and the wave you started because they want to be be voted again, sit in the front row and have agreat deal of power. They try to give you enough of what you want to shut enough people up again. That‘s why we got to act now to put pressure on the ruling class. Everybody knows sometihng should be done to save the migrants from these camps but as long as we don‘t force them to let them in they won‘t do anything but keep their feet still to not rise any more attention to it.

We think the most effective way is to attack them where it hurts the most and just stop if they give in. That can mean different things in different circumstances.

We think one of the best targets are churches (this time we chose one that worships the sexist, antisematic friend of tyranny Martin Luther). They represent every part of the facade of peace, morality and western values like the european union states them. Churches, similar to the EU, actually have shown or still show the face of colonialism, war and discrimination. They are very important for many conservatives and people who like the western countries. For them a church is a symbol of false peace, patriotic unity and tradition.

Let‘s make it a symbol of our resistence through smashing it and everything it stands for.

* We see the importance of doing the sometimes less flashy work of helping migrants with in their daily struggles. Not every action has to be an attack. Care-work is equally important.

** We know there are churches that participate in antifascism, help for asylum-seekers or homeless people. But if they are honest with their fundamental ideas they can understand this action and maybe even stop supporting this old institution of injustice and maybe even take part in making people of their community understand that the time to act is now.

Everyday should be an day for moria but we think it can be very effective to attack together on oney day each week. Starting today we call everybody to attack an symbol of this christian-white europe which is so holy to them on every monday until they stop their deadly border policies and help the people in need. To use #stayHome as an excuse to do nothing is privileged bullshit If you can‘t go out, their are many ways to attack the system. 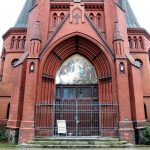 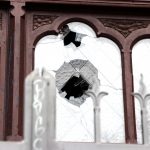 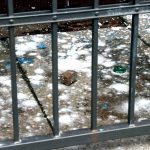