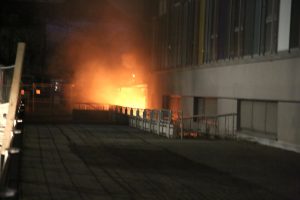 In 2002, under the leadership of the governing Social Democrats, a large-scale restructuring of the German “welfare state” began with the development of the “social reform Agenda 2010.” In the will to realign socioeconomic conditions according to a neoliberal economic and social order and to “future-proof” the management of mass unemployment, Agenda 2010 concealed above all a fundamental attack on the unemployed or precariously employed class.
The discourse turned the unemployed and precariously employed into those who were lazy, did not want to work, were happy to lie on the state’s pocket and sleep in at the expense of working society. The fact that the goal of full employment was nothing more than empty words, that important branches of industry were outsourced to Eastern Europe and Asia, and that a huge industry of hopeless training and continuing education centers was created with the construct of the Jobcenter, should not be used as arguments. With the job creation measures of that time, today one-euro jobs or so-called support measures, the statistics of unemployment are glossed over and the impression is given from the outside that support is actually happening.

The consequences of the Agenda are, in addition to the repressive apparatus of the Jobcenter, a massive low-wage sector, the option for bosses to order and fire workers just as quickly through temporary and short-time work, and an increased conditioning and division of the so-called “meritocracy”. The image that is conveyed worldwide is still one of prosperity and a secure welfare state, Germany, in which there is work for everyone, provided to people which are willing to be “activated”.
One of the striking consequences of this development is that a pyramid has been built up over the years of the service society, with bicycle delivery workers, harvest workers, Amazon drivers, security workers and cleaners at the bottom, most of whom have a migration background or refugee experience and not without reason do not have a chance of a better position or collective agreements in the FRG.

Especially in times of the worldwide Corona pandemic, the state suddenly fantasizes and rants about solidarity and cohesion. In a time in which class differences are more evident than ever before and solidarity in the sense of the state only means to sacrifice oneself even further for the continuation of capitalism.
While managers increase their profits in the home office, politicians prefer to debate about armed drones, telecommunication surveillance and facial recognition software, the majority of workers receive only a fraction of their wages, fear for the future of their companies or continue to slave away in the factories or hospitals. Meanwhile, the state is generously reaching into its pockets to help the large corporations listed on the stock exchange, knowing that in the long-pacified state, criticism of this or even a general strike are a long way off.

Due to the escalation of this social question, more and more people find themselves on the margins of society and we have not given up hope that in the long run, the outbreak of our anger cannot be prevented. Our role in this should be to stand by our friends from the queues of Jobcenters and immigration offices, in the cars of delivery services or in front of the gates of factories and logistics warehouses in their struggles and to let the lie of the “social partnership” go up in flames. For example, we were pleased to read from France that on Christmas Eve 27 vans of Amazon were consigned to the flames.

For our part, we used the last days of the year to put four car tires in front of the door of the Jobcenter Lichtenberg. No “stay at home”, no 87% short-time allowance and no emergency decrees applauding Leftist can and must make us forget that the existing conditions must be overturned. But if we don’t get going in 2021 to counter the state’s claims to omnipotence, especially during this pandemic, things will look increasingly bleak.

For a better tomorrow!