Actions Against the Forest Clearance 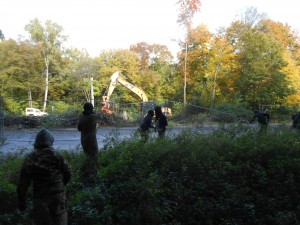 In the last days, several clashes happened in the Hambach Forest, who is endangered by clearcut. The events reached ended in the arrest of two comrades and the following reactions by activists yesterday.

Directly after the Skill-Sharing-Camp, in which environmental activists gathered at the Hambach Forest Occupation and blocked a coal train, energy company RWE built a several kilometre long fence on the former highway 4, which divides the Hambach Forest in two parts. RWEs goal was to secure the area which will most likely be cut this year against direct actions. On the inner side of the fence, the white Pick-Ups of the securities drove by very often.

On Monday and Tuesday there were first actions against the fence. Colour-Bombs were thrown on security-cars.

On Wednesday, ca. 25 people started an actions to enable again everyone to move in the whole forest. At several points, on a length of several hundred metres, the fence was damaged and destroyed. As the securities wanted to prevent thes things from happening, they had to take colour-bombs, stink-bombs and stones, and didn`t come closer. The action took 20 minutes in the first round, after an hour there was a second round for half an hour.The Securities seemed helpless, because they were outnumbered and not able to get to the „right„ side of the fence.

In the next morning, cutting works took place next to the old highway. The cutting machine looked like a normal digger and was guarded by only one security car. 20 Activists crossed the broken fence and smashed the window of the digger and the security car, the electronics of the cutting machine were sabotaged. One security tried to intervene and to arrest a person, but other activists prevented him from doing so. Afterwards, it was possible to do more severe damage to the digger, its hydraulics were cut and the electronics completely destroyed.

the group could retreat without problem into the forest. But a smaller group out of 2 persons, which was also present in the area, was missed. Police arrived soon and left the scene again together with an ambulance car. It was assumed the people had got arrested.

As a direct response to the arrests, a group of 30 people destroyed the remaining parts of the fence and smashed the windows of a truck. Afterwards, the two highway bridges which are used by the securities as permanent guardings points were attacked, lights and generators were destroyd. The securities were not able to react due to the size of the group.

In the next morning, a lawyer ensured the 2 arrests – one person was in the police station in Huerth, most likely to be held for longer. The police pretended the other person had not asked for a lawyer, so he could not gather information there.

We are sad about the arrests of our comrades, and miss Mr. Blue, who is in prison for several weeks now. But they will not scare us – an attack on one is an attack on all! And that counts for humans, animals and ecosystems! 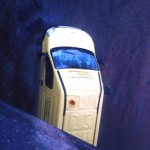 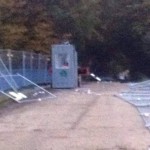 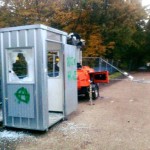