Various cars burned out in Berlin-Mitte 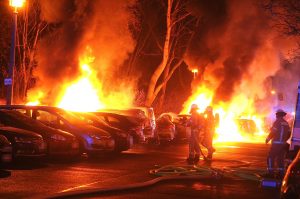 Fire Protection. A quite remarkable passion of the German civil service. Sometimes it makes generations of provincial politicians in metropolitan mania despair of their billion-dollar BER. Other times it creates the unimaginable: from SPD to AfD, political bigwig to hundred-man cop, real estate speculator to regular nazi – all of them suddenly worry about the life and limb of the residents of Rigaer94. The companions in the Hambacher Forest may have already experienced a similar amount of affection from the NRW Minister of the Interior, when he had them beaten out of the trees for fire protection reasons and for their own safety.

However, the friends in Rigaer94 themselves seem to have an interest in the safety of their house, so they had the district building inspector inspect the rooms. As soon as any deficiencies found are repaired, Geisel should finally be able to sleep peacefully again. Or he would finally have time to worry about the hundreds of thousands of tenants in Berlin whose fire exits to the roof are blocked by the landlord with a padlock.

Of course, things will be different. The fire protection of Rigaer94 is not so much a necessity under building law, but rather the last resort of a state apparatus that is slowly running out of ideas. We know this and, at the latest, after the final report of the building inspectorate everyone else should know it too.

Whoever continues to talk about the necessity of a „walk-through“ of the house by cops and tax evaders (aka „owners“) is either an idiot or part of the tacit agreement to continue talking about fire protection as a means to eviction.

Today the TÜV could take the complete house apart and stick three test seals on the last teacup, and Geisel would still stand on the next day before the press and would announce shaken that such an expert’s assessment is not sufficient.

They will probably not be dissuaded from letting 500 pigs maraud through Rigaer94 to write down afterwards what is not broken in the house.

Their goal is to destroy the house and its political structures, just as they are trying to destroy just about all remaining places of resistance. In the long run, we probably won’t be able to prevent that. Especially not if half of those who see themselves as radical leftists have limited their political activity for over a year to protecting us all with their Stay at Home.

But in a situation in which Berlin seems to have decided to flatten everything that still resists its exploitation and thus take away the last breath of air in this city – in such a situation, no one needs to complain that we begin to check the city for its fire safety ourselves.

As the tabloid press correctly noted, 15 cars burned in Berlin-Mitte, as an announcement of what is yet to come. Whether it is Bucht, Rigaer Straße, Potse, Meuterei, Köpi or Liebig34, any eviction of our places will leave rubble and smoke.

To our enemies we say: you have the match in your hand and it is already burning. It is your decision if you want to throw it into the gasoline barrel now, because you don’t know when and where the fires will spread.

We support the call „Autonomous greetings to the Berlin Senate“ by 129 autonomists.

We follow your steps in the Riger94 and try to bring our struggles together, so that the spectacle turns into chaos!

Since a sharp increase in burning parking spaces is to be expected in the foreseeable future, a few basic comments at this point:

– Despite the presence of upper-class cars everywhere, we should avoid drifting into total arbitrariness. Not every part of town is suitable for a sea of flames. However, the right car in the right street can ensure that the message is understood even without explanation.

– To be able to destroy only one particular car by fire between closely parked cars is an illusion. At the very least, melted plastic parts and cracked windows must always be assumed for neighboring cars. If the fire remains undetected for a long time and a strong wind blows, one small fire can sometimes turn into five burning cars. If you want to prevent the fire from spreading, you can use a hammer, a pointed object or a spray can instead.

– What may be a matter of consideration for cars is no longer so for residential buildings. We do not set fire to vehicles parked at apartment windows or in garages under apartments. It must be remembered that the heat generated by a car that is fully on fire can also be enough to cause windows to shatter across a narrow sidewalk.

– A burning car does not necessarily stay in one place. Without the handbrake applied, it can start moving and travel several meters.

– It’s not just in the cabs of trucks that people can sleep. A large number of precarious delivery drivers are also forced to spend the night in their vans. 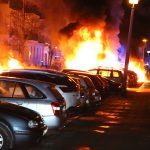 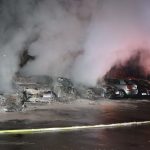 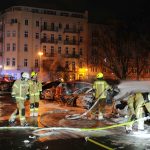