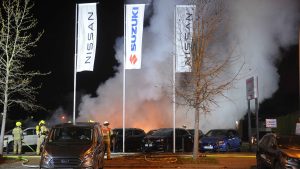 Nissan is one of the largest international manufacturers of vehicles for police agencies, private security companies and the military. At the moment, vans and off-road vehicles from this Japanese company are beating the competition in the market.

For example, the Hellenic Police recently announced that it would make the Nissan Qashqai the new main model of its vehicle fleet. 790 of these Jeeps have been ordered from Nissan. (1) They will be used especially for border protection in rural areas, but also for special units such as „OPKE“. Furthermore, the ND (Nea Demokratia) regime has ordered new and smaller vans from Nissan in order to show more presence in the winding streets of the cities, where the hunt for people is no less intense.

The blood of countless people, to whom the EU and the Greek state offer nothing but jail and death as their escape routes, sticks to these vehicles. Also the blood of the people who resist the new junta. And so blood is also on the hands of those responsible at Nissan. We will make them pay dearly for this.

In Germany, too, the war against migrants continues unabated. Only last Wednesday hundreds of people were deported to Afghanistan via Berlin. To a country whose population has been brought into one bloody conflict after another, which has cost countless people their lives, not only since September 11, 2001. We are not interested in whether a country is „safe“ or „unsafe,“ we completely reject the idea borders and everything that goes along with them.

Therefore, in the first hours of 14/4/21 we entered the premises of the Nissan base in Wendenschloss Straße in Berlin-Köpenick and caused a fire that disabled or destroyed twenty new vehicles, mostly SUVs.

Greetings to All who are trying to break the European borders.

To all who have been taking to the streets for months against the fascist methods of Nea Demokratia.

To the airport blockaders in Schönefeld and all the determined ones like those in Hannover who make the deportation authorities pay dearly.

By the way, the Greek government is spending a total of 31,000,000 euros on the most extensive procurement program for its police force in years, of which the EU is covering just under 6,000,000 euros: https://www.iefimerida.gr/ellada/programma-31-ekat-gia-elas-gileka-peripolika 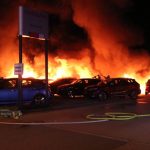 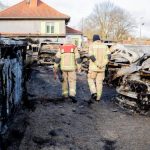 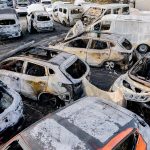