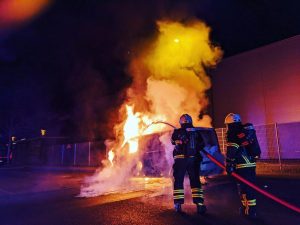 Yesterday, in the night of 24.4 we set a SIEMENS company transporter in Neu-Isenburg on fire with an incendiary device. We ensured that people would not be injured and that other vehicles would not come to harm.

We see ourselves as part of a worldwide movement that strives for a revolutionary upheaval. Therefore, we have decided to carry the struggle of the Kurdish freedom movement here as well. We live in the same oppressive system that fights ideas of a liberated society and cooperates with fascism.

The lived utopia of the liberated areas in Rojava has an enormous radiance with its steps to overcome capitalism and patriarchy. In their lived practice we see many of our feminist utopias implemented and taken further. In the never-ending revolution, an ecology-conscious economy and new society is being built.

We need these places of reinvention, we need these places that show us concrete alternatives. And we are aware that they will therefore always be a thorn in the side of the rulers. No state in globalized capitalism will allow an alternative and will therefore always fight it with violence and propaganda. Here, our protests, occupied houses and organizational structures are fought with repression. The revolution in Northern Kurdistan is fought with drones and bombs. In the process, from the belly of the beast, we are cooperating with fascist regimes like Turkey, supplying weapons and profiting from the war. In Rojava, the low-intensity war continues daily, with drones flying over the cities every day in an attempt to crush the hopes of the people. Meanwhile, the next large-scale attack is being prepared diplomatically and militarily.

Like the fighters in the mountains and Kurdish villages, we choose the means of self-defense. These are the same dreams that we have to defend together against the capitalist system and its war technology!

Here in the metropolises there are companies that earn money from surveillance and military industries, that put people in great suffering in wars and fight uprisings. One of these companies is SIEMENS.

The corporation has traditionally been involved in the arms industry and in equipping governments in various ways. Already in World War II, SIEMENS supplied the Wehrmacht with electrical equipment and enslaved at least 50,000 forced laborers and concentration camp prisoners to work for them.
In the U.S., it has a subsidiary called Siemens Government Technologies. SGT provides „digitization and modernization concepts“ for U.S. military bases and government buildings, working closely with the Pentagon and other U.S. departments. The company is also directly involved in the defense business. Dresser-Rand is a group of engineering companies belonging to SIEMENS Energy. Its main products are turbomachinery such as steam turbines, gas turbines and compressors in the medium and larger power range. However, Dresser-Rand is also an engineering supplier for hundreds of U.S. Navy ships, all nuclear submarines, and all aircraft carriers with steam and gas turbines and compressors.

SIEMENS PLM also produces software for the aerospace and defense industry; these are mostly control systems for the communication of various components of weapons systems or the like. The group is heavily involved in software solutions for 3D printing processes used in the defense industry.

SIEMENS also builds the laser radar system „Albis“ for guns and generators in warships and tanks.

New high-speed railroads and trains are to be built on the tracks of the historic Berlin-Baghdad railroad in Turkey. The first 300 km/h Velaro high-speed train built by SIEMENS was able to start operation in February 2015 on the Ankara-Konya line. The necessary investments are supported by loans from the European Bank for Development and Reconstruction and the European Investment Bank (EIB), among others.

Until 2010, the Group held a 49% stake in tank manufacturer Kraus-Maffei-Wegmann. It is interesting to note that in 2007 and 2008, shortly before the sale by SIEMENS, the largest deliveries of Leopard 2 tanks to Turkey took place. As a result, KMW experienced a large increase in value, which gave SIEMENS greater profits when it sold its shares.

Therefore, with a burning SIEMENS car, we send a sign against belligerent capitalism in general and the support of fascist Turkey in particular. We will defend the revolution everywhere!

„They can cut off the flowers, they will not be able to stop the spring.“

Şehîd Lêgerîn, an internationalist from Argentina fought in the medical field as part of the YPJ in Rojava and fell in Heseke on March 17, 2018. With her determination and hope, she is an inspiration and role model for us.
youtu.be/xYfE2lNbUd4