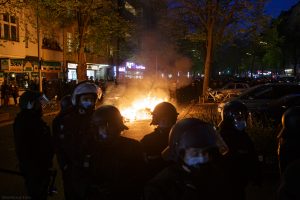 The Central Committee of Berlin Autonomists summarizes the evening of May 1st and draws a preliminary conclusion.

The revolutionary May 1st demonstration attracted far more people than expected to Hermannplatz. In the end, over 20,000 people were counted who wanted to march together through Neukölln and Kreuzberg. After the cops initially blocked the demo to then complain about distances, they attacked the anarchist and the Interkiezionale block completely out of thin air and separated both (along with thousands of other people) from the rest of the demo. In addition, they claimed that no masks were being worn in these blocks – which, given the exemplary masking of the blocks, is really the last thing to object to. The demonstration was planned de-escalatively and was supposed to be a safe place for all people, but it could not be after the attacks of the cops. Subsequently, the situation escalated „in the short term“ as police chief Slowik accurately stated. In the process, the cops completely lost control and had to retreat in fear from Sonnenallee again and again. For several hours they did not get proper access to the neighborhood but instead experienced the strongest May riots in the last 10 years. The strategy of the police did not work out at all, the new head of operations had hundreds of cops waiting in Kreuzberg at Hamburg bars and light poles. In addition, there were incompetent and overtaxed dog units from Baden-Würtemberg, Saxony-Anhalt and NRW. We hope that they will not forget their trip to Berlin too quickly.

Already at the beginning of the demo there was police violence and brutal attacks by cops at the Neukölln Arcarden. The number of injured demonstrators is in the high double digits. In addition, some people were arrested, probably just over 100. Compared to recent years, however, the balance looks much better, because the cops could be prevented from making arrests by attacks. Among the 20,000 demonstrators, there were just under 1,000 autonomous people present.

We wish all the people who were injured by the cops a speedy recovery. In addition, an unknown number of people are currently sitting in cells. It remains to be seen whether some of them are also threatened with pre-trial detention or similar. We call for solidarity with them. You are not alone!

An incomplete chronicle of the events:

6 p.m. – About 20,000 people gather at Hermannplatz for the revolutionary May Day demonstration. The blocks line up. An elderly resident heats up the masses from the balcony.

7 p.m. – The demonstration starts an hour late. Again and again the cops slow down the demo, compress it while simultaneously demanding social distancing. Speeches and music are played on the loudspeakers, the demo is very mixed and everyone is masked. Exemplary. The cops are hardly visible at the edge of the demo.

20:20 o’clock – At the Neukölln Akkarden the cops needlessly escalate shortly before the anarchic block. Almost half of the demo, including the Expropriation Block and the Interkiezionale Block, are accused of violating the mask requirement. Where the cops usually rock in because everyone is masked, they now see unmasked where everyone wears a mask. Coming from the airport road, they fight their way into the demo.

20:30 – A few people start to tear apart the construction site in Fuldastraße in order to be able to continue. Shortly after, the cops attack them, at first bottles and stones fly back, then barricades are built for protection.

21:00 – One street further on, there is tension with the cops, who continue to hold half of the demo captive. Stones, bottles and sticks are hailing down on them, and the first barricades are set on fire.

21:10 – The cops have completely lost control of the Sonnenallee Weichselstraße intersection. Several squads try again and again to get onto the intersection, but have to retreat under massive amounts of projectiles. The windows of the BioCompany crack, nearby an SUV catches fire.

21:20 o’clock – The arrived cops from Baden-Würtemberg and Saxony-Anhalt have a hard time regaining control. A police van has to take to its heels. Barricades are burning on both sides of Sonnenalle, one takes up almost the entire street and is somewhat reminiscent of the fires in the Schanze during the G20. The first cops try to get in, but are chased away under Flaschenhagen.

21:30 – More and more cops come from all directions and slowly get the intersection back under control. It pops off further up towards Hermannplatz and in the neighboring streets.

21:45 – The streets are still full of people. Barricades are burning on Panierstrasse and Weserstrasse. The helicopter is still circling over Neukölln and thousands of people are on the move.

22:00 – The curfew goes into effect, slowly the cops get the situation under control. The bridges to Kreuzberg 36 are blocked with several chains and at Oranienplatz – the actual end point of the demo – two dozen tank crews and lighting trucks.

22:30 There continue to be sporadic attacks on police vans and squads. A small rave takes place in Hasenheide. However, the tide has turned in favor of the cops again.

23:00 From a backyard on Kottbusser Damm suddenly come masses of rockets and firecrackers. The Baden Württemberg BFE does not dare to enter. Berlin is not Freiburg.

* for all journalists who already want to print this cheerfully: There is no central committee of the autonomists. Who knows if the Autonomen still exist at all. 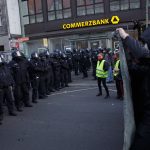 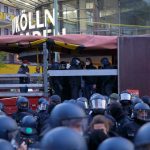 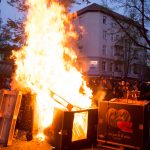