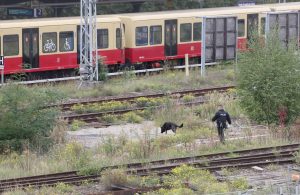 Lockdown for the capitalist patriarchy!

You continue as before? We sabotage the increasingly catastrophic normality. They want the city running smoothly, so we shut it down in short order.

Disrupted workflows, delays, broken infrastructure, economic damage: every eviction will be expensive for the city. A city that lets everything be marketed. A city that destroys its neighborhoods with hollow hipster culture. A city that pretends to be cosmopolitan – for those who have money. We have long since had enough of the lying liberal crap.

A labor force that is supposed to bring workers from here to there early in the morning. So today no service and care work. Poorly paid jobs in discount stores, in construction, in restaurants, in care, in the fields. „Everyday heroes“ who can wait for real social recognition until the end of days.

This morning, we started a fire on the railroad line at Frankfurter Allee.

We ruled out any danger to people. For safety, we set the fire at a distance of at least 20 meters from the transformer house where a homeless refugee lives. Two supply lines to the transformer house of four cable shafts were our target. The fire destroyed signal cables, communication cables and power lines.

In the capitalist patriarchy it is common practice to make bills. A militant group has estimated 34 million euros for the evacuation of Liebig 34. We take up this call. Since this is the only language that is understood, we serve the corresponding receipt.

Our Struggle, our Fight is only over when people share their joys and their sufferings, their work and their riches, when everything belongs to everyone. When there are no more rich people who have to be protected, and no more class distinctions. When there are no more femicides and no more guns. No more cop NSU 2.0 and no more Nazis. When it doesn’t matter what color skin, gender, or appearance someone has. Everywhere in the world. And when the planet is not further destroyed.

Stop consuming – fight! It’s about more than the Liebig 34.
Form gangs, action groups, volcano and magma groups, FAZś and much more!
Power and love to all persecuted, imprisoned and tortured anarchists and feminists.