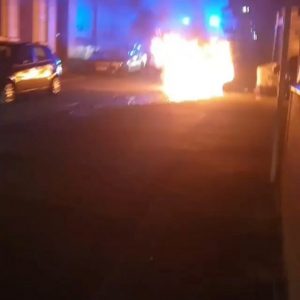 One week before the “Bundeswehr Day” [Armed Forces Day] taking place nationwide at various Bundeswehr bases, we lit a German Bundeswehr military vehicle on the front tire in the morning hours of June 7, 2020 in Ludwigstrasse. The engine and front part of the T6 “Widder” are completely burned out. Unfortunately, we do not know whether the loading area of ​​the van also caught fire. We have made sure that there is sufficient distance from homes and other vehicles to prevent any risk to people.

We acted in solidarity with our sisters and brothers in Kurdistan.
Again and again it happened that the fascist Turkish army also used former vehicles of the German Bundeswehr in their war of annihilation against the Kurdish population.
Not only numerous Leopard tanks, but also vans from Mercedes or Volkswagen are used cheaply sold to Turkey or even given away. The war is a profitable business for the German state and a large number of companies. So also for the company Freytag, which carried out the conversion of the T6 “Widder” produced by VW for the Bundeswehr.
These murderous war equipment deals must be ended. So we took the initiative and thought that what is burning here can no longer cause damage elsewhere.

Solidarity with our sisters and brothers in Kurdistan

Stop the war of extermination against the Kurds