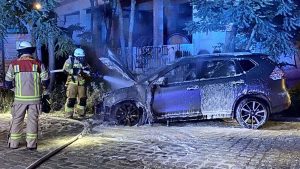 In complicity with the insurgents of this world and especially with those in revolt in the centers of the French metropolises, as well as the rioters in the banlieues, we torched an SUV from the French Embassy in front of one of the bigwig’s buildings at the Gleisdreiecks park in Schöneberg, Berlin at dawn on June 30th.

We send this sign of solidarity to all those who have long been confronting the cops of the colonial power France with stones and incendiary devices, looting and permanently challenging the state. Be it in the so-called hot zones of the French-dominated territory in Europe or overseas. The gendarmerie, BAC, CRS and other authorities regularly feel the anger of the oppressed on whose side we stand.

We also enjoy moments here when the anger is released and young people in Stuttgart or imprisoned people in Göttingen face the cops with stones, bottles and everything they have at hand.

Our attack is a nightly message of solidarity to Loïc, whose trial is coming to an end in Hamburg, and to the “Park Bench 3,” who do not give in to the pressure of the Hanseatic justice system.

The embassy employee we attacked lives in a disputed neighborhood where the marginalized population is being ousted by bigwigs. This is not the only reason why Gleisdreieckspark and Steinmetzkiez in Schöneberg, Berlin are places often mentioned in police reports in connection with riots. The anger and frustration about the displacement and exclusion is expressed in many different ways in the few still unbending squares, street sections and backyards. We also support this form of resistance symbolically with our fire.

Even if the situations in the metropolises continuously restrict our freedom, we would like to briefly address the question of whether the militancy often practiced serves to achieve our goals. The reflective text on the Squatting Days in Freiburg (1) asks this question. We share much of the analysis there – for Berlin, militancy is sometimes also a contribution to creating a climate in which it is easier to direct violence against the state, its representatives and symbols, as well as the values of society. Columns of smoke and cop cars racing around are mosaic pieces of a partial and in some places creeping loss of control by the powerful and should encourage resistance.

(1) A house occupied by young people in the nearby area that was evicted a few hours before our attack.