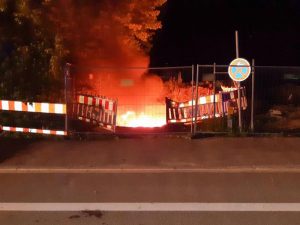 Turn off the juice to war producers!
Kick the ass of energy suppliers!

We attacked the power and fiber optic network of the Stadtrwerke in the east of Munich on May 21.5.21.

The primary target of this action was the arms company Rhode & Schwarz at the Munich Ostbahnhof, which we were fortunately able to cut off the juice to for at least 24 hours. R & S is one of many companies that make their profits with arms production, war and death and contribute to the fact that Germany has been among the top 5 global arms exporters for many years.

In addition, the action was an attack on the people who are politically responsible in Munich and Bavaria, who do not want to hear the gong strike.

It is our answer to the pathetic city council decision to cut down the Forst Kasten to extract gravel there. Stadtwerke München continues to operate a coal-fired power plant in Bogenhausen and the Isar 2 nuclear reactor, so we will continue to attack their infrastructure.

There is no solution within the capitalist system.