Incendiary action against a Suzuki dealership 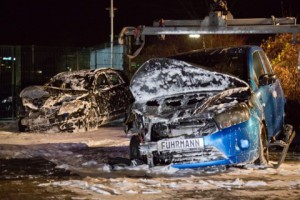 viva Alexis 06.12.2008 / 7 years ago an anarchist rebellion began in Greece which then spread internationally and still continues. Despite numerous attempts to torture and kill our comrades around the world we have refused to be intimidated and the state repression has only made us stronger.

In the context of Black December we torched two vehicles at a Suzuki dealership hoping that the fire would illuminate the building. Suzuki regularly supply the Greek state with new vehicles so they can torture better such as those used for counterinsurgency by Delta squad.

Suzuki motorcycles are used by these minions of the recently reappointed Greek regime against it’s population in the field.

We dedicate our action to Alexandros Grigoropoulos who was murdered in Exarcheia on the night of December 6, 2008.

We are aware of the purely symbolic nature of our action and are also aware that in the metropoles these actions are hardly noticed, however, we hope that the few who did notice imitate us and share our destructive intentions by launching their own operations to attack the system.

There are always plenty of reasons at any time to unleash destructive intention and attack hated (un-)state institutions and their servants.

These years of lethargy should have been taken advantage of so that we could regroup and discuss new methods of direct action.

for a Black December

Freedom for all prisoners of the uprising worldwide