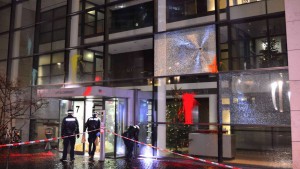 Nevertheless we were glad to find a contribution on this year’s conference (32C3) as a very clear position against facebook (documenting a direct “defacing”-action at the german facebook headquarter in Hamburg two weeks ago).

Since last week Mark Zuckerberg went on parental leave in his early 30ies – good for him. His female employees on the other hand are pushed to postpone maternity by means of social freezing until way after 40 to enable exploitation of the work force of young women without family planning getting in the way. Nominally supporting self-determination of women facebook and Apple were the first companies to put that kind of pressure on female employees to optimise their job performance by offering to meet the costs of freezing ovules. They should no longer drop out starting a family at a time their performance was at its best. But this only on the side.

In our social setting it is part of the etiquette to not like facebook. A lot of us demonstrate their critical attitude towards the IT giant without consistence. Everybody knows facebook saves all our data concerning our whereabouts (GPS- as well as based on the internet), reads all our text messages and phone call protocols as well as internet connections, records videos, photos, sound and reads and manipulates contact data and calender entries on its own accord without informing users, reads the enlistments of other providers on smartphones, accesses other apps and downloads files without any further notice.

Facebook analyses our preferences and interests and compiles an individually adapted data stream. In terms of information a lot of people move in a such filtered facebook bubbles the dynamics of which are determined by facebook. The importance of classic non-personalised editorially edited compiled messages is dwindling. Facebook increasingly prompts journalists to write directly for its platform. Facebook determines who will receive what in which form.

You may link yourself to our social network, but what you get to see and whose messages you receive and who your friends are we will decide. Whoever controls the internet doesn’t only control what people know, but influences their opinions preferences and habits – all of this on a highly individualised level.

Everbody knows that the manipulations of communication through facebook is completely overbearing. We would never allow a national authority that kind of power to control without resistance. But nobody cares because a negative effect will only be of personally significant impact sometime in the future. If only the manipulative interference in our lives is smart enough nobody will seriously be offended by the massive restrictions of our self determination. The internet develops much faster than the awareness of people of the consequences of digitalisation does. Since long the speed of the technological development has been significantly determined by that what alpha-males from amazon, Apple, facebook and Google and others from the valley of technocracy believe to be entitled to expect of us.: „The companies policy is to push the borders of what people find disturbing, but never cross that line.“, Google manager Eric Schmidt says.

Facebooks insolence can’t be explained with the diminishing importance of the term „privacy“ alone. The interference with our information, experience, work, free time and feelings is much more consequential. It will fully reconstruct our lives heteronomously without any conscious calculation discerning between empowerment and incapacitation.

You think that too abstract and too ephemeral?

Ok – since our imagination isn’t even remotely as far-reaching as that of our technocrats who are actively working on a world in which only technological solutions for social problems will be acceptable we will for now stick to the present:

Deleting racist postings on request.“ Eat dirt you Syrian scumbag“ and „Give security forces guns and zap the pseudo-refugees already.“ Facebook acts as the keeper of free expression of speech and answers: „We have investigated the hate mail you reported and established that it doesn’t transgress our community standards.“ The following three examples should clarify that facebook doesn’t really advocate neutrality in this respect:

Persecution and obstruction of escape agency in cooperation with Europol

In April 2015 the European council decreed to act against attracting refugees. To stop refugees approaching escape agents Europol started a cooperation with facebook and Twitter. Since August, the 1st the registration office for internet content (IRU) appointed supplemental workforce to scan the social media for escape agency activities. In future immediate deletion is supposed to be carried out if anything strikes the employees. On top of that Europol is to be equipped with immediate access on tracking data on facebook without having to require them from the respective member countries. The registration office is to be supervised by the European Counter-Terrorism Centre (ECTC). This was decided before the attacks in Paris! No state of emergency needed. This has come to be normal European standard.

In June 2014 it leaked out that facebook was psychologically manipulating the sites of 700.000 users for a prolonged period without them knowing it. This group was fed the positive postings of their facebook friends. Negative posts got a lower ranking or were entirely suppressed. Then the impact this algorithmic mood enhancer had was monitored and – what a surprise: users unanimously expressed themselves more positively in their own postings in comparison with an equally large group that had been negatively manipulated.

A facebook spokeswoman responded to the scandal in the Guardian. The experiment was carried out „to improve our services and to make the content people see on facebook as relevant and engaging as possible“ She coninued; „A big part of this is understanding how people respond to different types of content, whether it’s positive or negative in tone, news from friends, or information from pages they follow.“ Facebook would carry through a lot of such experiments in which users are involved without their knowledge which is covered by the terms if use.

How far the focused manipulation of discontent by facebook is prepared to go will unfold two months later:

On the 9th of August 2014 The 18 year-old Michael Brown was shot in a stop-and-search operation by the police in Ferguson. A police patrol stopped him because he had dared to walk on the street instead on the pavement. During the discussion that followed a bullet escaped from the patrol car. Brown fled and was shot in the back by a policeman. Michael brown was unarmed and he was black.

The next day black citizens from the town gathered for a picket which was opposed by 150 ironclad policemen. The mood was heated and things got out of control, rioting an looting ensued. On the 11th and 12th of August the police used armored vehicles, dazzle grenades, gas and rubber bullets on the outraged crowd. The images of the martial line of action against the uprising went through the media worldwide and of course through social media as well. But not equally through all of them.

Zeynep Tufekci, lecturer at the university of North Carolina researches the political power or algorithmic news filtering. In a contribution on the blog portal Medium she states that in her facebook stream Ferguson hardly appeared whereas there was almost no other subject on Twitter. But this wasn’t because nobody on facebook was writing about it.

The Edgerank algorithm that according to facebook edits news according to personal relevance seems to have filtered away the subject.

What if facebook the moment social revolutionary dynamics emerge will turn its services even more against us or selectively refuse them entirely? Is it only then that we want to adapt an independent technique to spread information and communication?

It is already rather surprising, that the autonomous movement seems to feel the convenience of a platform and belonging to the informational mainstream to be more important as its autonomy, but that we actively contribute to repression through Facebook is hopefully taking it too far! Or are we prepared to accept cooperation with authorities and undermining of leftist resistance mediated by facebook while we continue to declare any direct cooperation with persecuting authorities to be unthinkable? That seems neither credible nor does it make any sense.

There is resistance – even against facebook! „Zuck off“ the facebook boss in India is hailed with. At the present moment local activists with lot of public support are fighting the facebook project internet.org with which facebook intends o supply the poor in remote districts with free internet. The stumbling block is that facebook wants only 35 Websites to be visible in that charitable interent for all – facebook itself in the first place. Access to the rest of the (internet-) world is blocked. Accused of censorship and controlling Mark Zuckerberg’s reaction is cynical, pragmatic, and smug: „it is always better to have some access than none at all.“

Resistance against this poignant form of internet-non-neutrality can be detected though. Four of Mark Zuckerbergs chosen providers among them the Times of India have retracted from the facbook project because they didn’t want to accept the accusation of being part of economic racism and landgrab.

But does a symbolic non-digital attack on a giant of the alleged digital world really make sense? Yes, it does – the management of Google was sensitive to the attacks of activists fighting against gentrification by stopping Google-buses: public protest against the astronomically rising costs for housing in the vicinity of the bus stops of these shuttle buses that take thousands of Google employees from the neighbourhood of San Francisco the seat of the company in Silicon Valley every day. Demonstrations that followed forced Google to drop a certain construction project. Similarly Googles first version of data-glasses failed because of the broad effect the campaign of its enemies had on the public and was taken from the market. Activists in the US had defamed users of glasses as glassholes and got rough on them taking off their glasses for them. In consequence glassholes weren’t admitted to a lot of the most popular bars and clubs.

A militant motorway blockade by taxi-drivers against the taxi-app Uber immediately next to the airport of Paris for one day was the final straw to its prohibition. At the beginning of the last month activists occupied the head quaters of Airbnb in San Francisco to spread the fights for affordable living space in precisely the location which is increasingly responsible for evictions and turnouts.

We see the necessity to actively defend ourselves against the digital control and usurpation of our lives and to fight this system and its business partners. A rebellion against this world will not happen by reforming the internet.

– Get out of the incapacitating constriction of heteronomy
– Facebook, Google, Apple Amazon and friends need to be taken down from the internet
– Contribute to the counter attack as well as the organisation of alternatives
– The internet is corrupted – reboot!
– For free independent communication
– For Autonomy
– Against all authority!

PS: If you LIKE our action, don’t share it on facebook
If you DISLIKE or don’t know what this all about you will probably do so anyway.