Attack on the French consulate 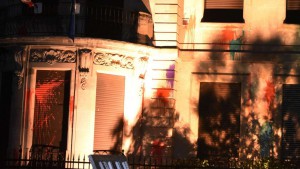 Yesterday [April 19th] in the early evening, around 100 people demonstrated in solidarity with the struggling youths in France during a wild demonstration through [the district of] Bockenheim. For weeks now, thousands of people in France take to the streets against the “labour law“.

The youths and rebels are fed up with racist police controls. Lots of people defy the massive expansion of the security apparatus during the alleged state of emergency on it’s way towards an authoritarian police state. They feel the impact of tear gas daily! The Spring movement in France refuses to become harnessed into the labour market. The youth know very well that the neoliberal project benefits no-one – except capital.

Our friends in the streets of France know very well that protest must hurt. They know as well that resistance can’t just be articulated in the framework of the authoritarian state‘s law. The Bastille was not stormed by the grace of the king. So we decided not to comply to the constrained framework of German smugness. While the demonstration passed by the French consulate, we decided to express our direct solidarity. Many paint stains and some smashed windows testify to this. Of course, this is nothing compared to the hundreds injured by tear gas, pepper spray and police batons weekly. But it is a distinct signal.

So were our slogans on this early evening in Frankfurt. The police obviously came too late and they better did so. We were prepared to defend our demonstration against police attacks. Fortunately, this was not necessary.

We know your lies: This was not a Hit and Run action of “25-30 leftist autonomists” as the cops report it, but a taster of the coming times of common struggles. And don’t pretend that you don’t know the reason for all this.

Youth and insurgent – the world is ours!
A message from your friends