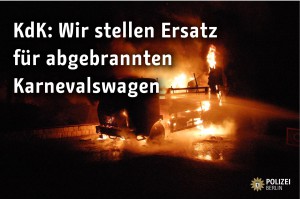 In solidarity with the 600 and more comrades who attacked the border at Brennero, we want to send a sign of solidarity. For this, we did set a whole Truck from the Police in the capitel of Germany, in a backyard in Berlin on fire, in the night of the 11 of may. the truck was lend to a school by the police for the Karneval der Kulturen, but no backyard is safe enough as they may have noticed. As we, here in Germany face steady Uprising of far right and fascist mibilizations and parties, knowing that the roots of the so called „migration crisis“ lay foremost in economic and racist policies initiated and reproduced by the richest countries of this world, we are aware that this struggle against Fortress Europe is a struggle for freedom and self determination in all senses.

As we saw the videos and media resonance of the demonstration of the 7th of May on the italian side of the Brenner Pass, we have been fully impressed by the decisiveness and courage the group of Masked and Hooded showed in throwing stones, fircrackers and smoke bombs relentlessly, in spite of the clouds of tear gas and police brutality with which the authorities tried to eliminate the attack against themselves and their idea idea of nations sourrounded by barbed wire. And esspecially in spite of the sourrounding, as for us it seemed much more tricky to act and escape in the middle of the Alpes, where there is no mass of people or small streets in which one could disappear.

While blocking the train service and later on the highway, the violent protest was organized to defend and fight for the idea of open borders and against the claim of the Austrian and in generall all EU ministers who want to block all routes of migration versus the rich Middle and North of Europe.

The so called „adriatic route“ from Albania to Puglia in Italy has tourned into a new alternative to reach the richer parts in Europe, as the borders on the Balkan route are more and more defended and upgrated with material and economic ressources and support from those countries, who are afraid of permeable borders (more to this, see the english article on: abbatterelefrontieri.blogsport.nl/p/documenti.html).

We want to pronounce that this action at the Brenner Pass seemed for us very efficient and needfull. First in sending solidarity to all migrants via channels, that were not too clandestin to reach, as it is too often the case concerning anarchist struggle we think. This was possible because neraly all european newspapers reported about the actions, but also because there was the try to mobilize also outside of Italy and it was the plan of a mass action and not a small-group-secret-and-fast-smash-mob.

Second it reached the goal to show a broad public the hatred, resistance and militant capability of acting against the border policies of imprisonment, violonce and Dublin II bureaucracy, which in our opinion a peaceful and colorful demonstration is rarely able to transmit with the same intensity and credibility. In our eyes the reason for the newspapers to document these clashes lay in the decisive and militant character of the action. With this second point we want to emphasize, that militancy is a strategy.

The 3rd point is about the legitimate and necessary result of this form of protest: hurt authorities and smashed property. Facing the murderous violence these insitutions and persons execute every day with mostly rare and harmless consequences, we think it is not to be asked if we are „allowed“ to answer (or in better cases to act self determined) with violent an illegal means.

For the people who got arrested:
We try to put pressure from outside and we send you warm thoughts of never ending uprising and struggle:
Until all are free.