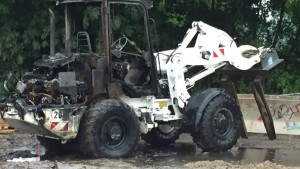 As we have learned from our observations the construction group Vinci is criticized in France for its involvement in projects such as the planned airport on the territory of the ZAD as well as the construction of nuclear power plants and prisons. Sometimes Vinci vehicles have been torched.

So we came up with the idea that perhaps a burning Vinci excavator is an appropriate greeting to the rebels in France, to those injured in the demonstrations and to the prisoners.

We think it’s great that you have been able to (at least in phases) seize control of the streets from the lousy CRS and BAC pigs and that banks, shops and PS-offices are being trashed.

And so, on the night of June 17th we torched a Eurovia Vinci excavator in Berlin-Lichtenberg.