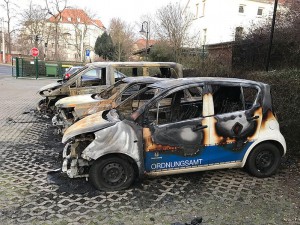 In the late evening hours of 06.12. we torched three vehicles in Leipzig. There are many reasons for this, for us the occasion was the anniversary of the assassination of Alexis Grigoropoulos in December 2008 by Greek cops in Athens. Nothing has been forgiven – no one is forgotten.

We were pleased to learn that on the same night in Berlin, some people had apparently set fire to the door of a public order police office.

Super also that a few weeks ago a cop car was torched in front of the station in Connewitz – who needed it already.

We look forward to a delightful mobilization against the G20.

Down with all states – death to Germany!