Arson attack on a police station 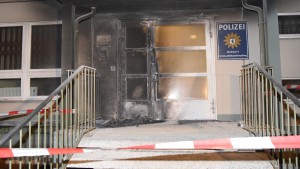 On February 21/22 the European Police Congress will take place for the 20th time in Berlin. On this occasion at the Berlin Congress Center (BCC), war mongers, human hunters and security fanatics meet to propagate their despicable machinations.

In addition to Thomas Thomas de Maizière, the Federal Minister of the Interior and Hans-Georg Maaßen, the President of the Federal Office for the Protection of the Constitution, agents and guards of all types will be represented by Europol, Frontex, BKA, LKAs and many other authorities. Also present will be lobbyists, entrepreneurs and war ministries such as Heckler & Koch, Taser, Rheinmetal and developers of monitoring software and communications technology such as SAP, IBM and Vodafone will also be present.

Under the slogan – Europe limitless? Freedom, mobility, security – the coming campaigns in which authority is put into position will be discussed and the appropriate technologies and weapons will be brought into the field.

Words such as limitless, freedom and mobility are above all the transnational cooperation of the repressive European bodies, the exchange of data and knowledge and the militarization of Europe and its external borders.

We find such a meeting an insult and think: “These pigs, this must not be..NO!” Just as insulting is the G20 summit that is to be held in the summer in Hamburg. The defenders of the existent and those responsible for the prevailing misery have not earned themselves a platform. This is why we conspired against the system of borders and control, and attacked the police building of the Kriminalpolizei (criminal investigation agency) in Directorate 6 with two sets of incendiaries and a tire.

For all those who are separated from us by fences and walls.

For the hundreds of thousands of people who have to risk their lives on the outer borders of Europe.

For the two imprisoned anarchists who were arrested due to a joint operation by the Spanish Audiencia Nacional and the LKA North Rhine-Westphalia and accused of a bank expropriation in Aachen and have been in court since January.

For Gabriel Pombo da Silva, who was temporarily detained by the Spanish state’s guard dogs at the end of January and confronted with the construct of the ‘illegal arms and ammunition trade and the founding of an armed group.”

For the revolt in the Parisian suburbs that has been going on in the streets for over a week against the racist police attacks.

Fire and flames against repression – down with fortress Europe
See you in Hamburg – Tschüss! (Bye!)

To all interested parties who would like to give the companies and institutions involved in the police convention some further affection: 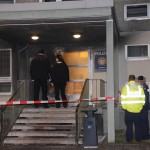 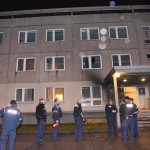 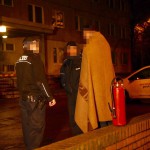