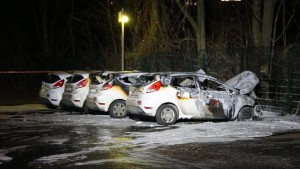 Bon Soir! On the evening of the 28th of February, six Securitas (private security company) vehicles were torched at Anhalter railway station. Securitas have been gaurding the entry to the occupied school on Ohlauer Strasse in Kreuzberg, Berlin for two years, forcing the remaining refugees to a jail-like existence. Through constant displays and harassment of the residents, their number has been constantly reduced – many have disappeared in jail, have been deported or have a house ban.

If we were able to identify more deeply with society’s slaves we would now complain that ‘guarding’ costs millions of euros for taxpayers. But no. Then we would have to complain about the bad working conditions in the security sector. On the contrary we are working on the destruction of the bridges of this society, which are still being preserved via the security sector in order to integrate even the partly autonomous milieus with reluctant practice.

This why we look at each other with sparkling glances and realize that the channeling of anger is increasing in many remote regions of this shitty world. We read about the riots in Sweden, the seething rage in Switzerland and the attacks against the guardians of the system in France. We will not continue to celebrate our affinity in secret, but will make it visible through the perceptible swaths of burning tires, buildings and whole parts of the city. As our comrades in Greece formulate, we also want to set the nights of comfortable society on fire and transform our cities into unregulated battlefields.

There are individuals who have not fallen into the bondage of the system and determine their own perspectives so as not to fall into the same disgrace. The recapture of the last anchors and the rebellion against this slavery / barbarism is increasingly stronger. To those names we have experienced, we also dedicate this attack to strengthen them in their struggle or to keep the memory alive:

For Tamara Sol in the prison of the territory dominated by the Chilean state, for her retaliation against a security mercenary.

For Nikos Maziotis and Pola Roupa, who are forced to fight in court against the hostage status of their child.

For Lambros Foundas who was shot dead seven years ago in a fight against the pigs in Athens.

For the countless fugitives who are murdered in the name of the EU at the borders by private and state mercenaries or guarded by private security companies in deportation camps.

We, a conspiracy of vengeful arsonists, call upon the global cells of anarchist action to support proposals from the German-speaking countries to use the G20 summit to strengthen our common praxis. In this sense, reference should be made to the idea of informal coordination. For us, there will be no summit with temporary protests, but an attempt to establish previously uncontrollable conditions without political demands. 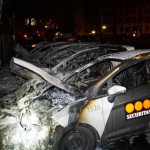 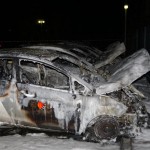 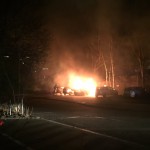