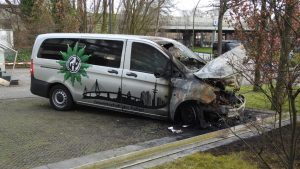 In Hamburg we say goodbye to cop cars – On March 17, we set fire to two police cars in Hamburg. Right near the residence of Mayor Olaf Scholze we burned the vehicle of his guards on Schmarjestraße. In the Hindenburgstraße in front of the office of the police union (GdP) and directly in front of the police, a GdP van was torched.

The police union and their national chairman Kirsch threatened after the riot in Hamburg on 21.12.2013 that “Next time we will use sharp shooters!” A warning of an escalation in Hamburg, with reference to the clashes in Genoa and the assassination of Carlo Giuliani, was issued in a similar manner by the Confederation of German Detectives. It is quite clear that in the event of a loss of control during the G20 summit that dead demonstrators cannot be ruled out. The daily victims of the cops are seen as necessary collateral losses for this system.

The police union together work with the German police force as the political arm of the cops. They urge for a tightening of penalties regarding ‘physical’ attacks on police officers. For example, the planned paragraph 114 proposes that attacks should be punished more easily and more severely and in any case with imprisonment. There would not even need to be any physical injury. And if the attacker is carrying a weapon without using it or with the intention to use it, the punishment increases. The previous legislative paragraph was already tightened in 2011. But, contrary to the figures presented to the public, attacks on police officers have actually decreased in recent years. Even criminal lawyers have stated that serious injuries to police leading to prolonged incapacity in Germany are extremely rare. How unfortunate! So it seems obvious for whom their laws work.

The police union now have one less vehicle to provide the cops with coffee during the summit. And there is also one less van that can get in our way or patrol our neighborhoods. This may not be much, but it can be repeated at any time by anybody who decides to do so. Let us destroy what oppresses us. There is nothing to wait for!

We remember Ian Tomlinson, who died of a heart attack at the London G20 summit in 2009 after the cops had knocked him to the ground several times, bashed him and made no attempt to revive him.
We remember Carlo Giuliani, who was shot dead by the cops during the Genoa G7 summit in 2001. And to all those whose names are unknown who were murdered in everyday circumstances by the cops.

Before the summit, during the summit and after the summit: Against the state, capitalism and all authority!