Arson Attack Against the Vehicle Fleet of ‘Deutsche See’ 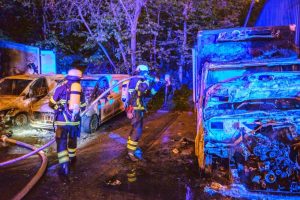 Responsibility claim for the arson attack against the vehicle fleet of the ‘Deutsche See’ company at Große Elbstraße 244, Hamburg on 28.04.2017
– To attack G20 also means to attack those who profit from the destruction of global fish catchments
– In Hamburg we say goodbye to Deutsche See

“Our fish are welcomed by people in Europe, but we are told it is best if we stay away”
(Statement by a fisherman from Senegal)

In the early 1980s, Europeans moved their fishing grounds to the south. Floating fish factories fished the stocks away leaving little left for local fishermen. Off the coast of East Africa, near Somalia, the European fleets forced out local fishermen causing them to resort to piracy

In 2012, a quarter of European fishing was carried out in international waters however they also looted the sovereign territories of West African countries such as Guinea, Mauritania and Senegal. After the Senegalese government briefly took away the fishing licenses of EU trawlers they merely continued under other flags or created joint-ventures. Now huge numbers of refugees from Senegal slave away on plantations in Almeria (a city in Spain) harvesting tomatoes – for supermarkets that contain freezers full of fish for sale from their waters.

Several hundred million people depend on fish as food. A study by the WWF titled ‘Overfished and Under-Supplied’ predicts that in the near future millions of people in places like Senegal and Indonesia will no longer be able to afford fish as basic food.

According to the FAO (Food and Agriculture Organization of the United Nations), only 13% of the world’s fish stocks are large enough to be able to regenerate. Despite restrictions, continued overfishing and exploitation of the oceans have led to a huge decline in fishing yields since the 1990s.

So-called conventional aquaculture differs very little from how factory farming is practiced, for example things like poultry farming. Prawn farms among others along the coasts of Vietnam and Thailand are responsible for the destruction of the mangrove forests in the biotopes of the marsh areas.

The ‘Deutsche See’, headquartered in Bremerhaven, is the market leader in this country. Only 20% of the fish consumed in Germany comes from the North Sea or the Baltic Sea. The company obtains the rest from other oceans and operates as ‘the most modern fish factory’ in Bremerhaven. 60000 tonnes of fish are ‘processed’ and 400 million euros in sales are achieved annually. Fish is expensive. Indices such as the Oslo Sea Food Index are breaking all records. From 20 locations, refrigeration trucks leave from Bremerhaven and Bavaria travelling all over the country in order to satisfy Germany’s insatiable appetite for fresh fish.

In Hamburg it is only a few meters from the ‘Deutsche See’ to the fishing harbor restaurant where the American and Russian ministers dined during the OSCE meeting. The delegates from the G20 will also dine there.

– spit the G20 into the fish soup
– no walls around Europe, Refugees Welcome 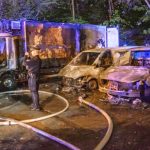 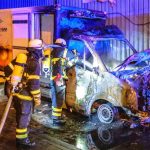 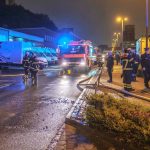