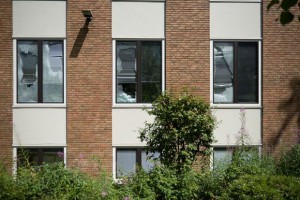 More than 20,000 people dead, drowned in the Mediterranean during their flight, several kilometres of high-security fences, overcrowded lagers (detention camps for migrants under expulsion), targeted militarized rejection of refugees.

We know all these media images. The shipwrecks are caused by the expulsion policy following the statements of politicians, oozing with false distress. Military rejection of people in poverty – this is generally the objective carried out and desired by the German and European asylum policy towards refugees.

But all this does not just take place at the borders and sea routes in southern and eastern Europe. The war against refugees is also taking place in the middle of Germany. Whether it’s harassment of the immigration authorities, isolation, criminalization, racist cop and customs controls. Or like the current worsening of the German Law on Asylum adopted by parliament. What the state does not obtain there, mobilizations of angry citizens with claims and hate speech succeeds in even more aggravation and penal severity. Neo-Nazis are committing more and more incendiary attacks against facilities for asylum seekers.* The minister of the Interior ** and his institution support its conditions and politics that goes with it and apply with their full free will.

For this reason, with our modest means we caused over 10,000 euros’ material damage *** to the immigration authorities on the night of July 18, 2015, which so readily presents the senator of the interior Mäurer as head of the policy of Bremen. The attack was also aimed at him personally and his bureau.

We do not act in the hope that the dominant politic can be stopped but we know perfectly where the policymakers sit. Consider it a small demonstration of our hatred – against your prisons, your borders, your cops and your shit authority.

We take the nights and you sleep.

Autonomous group.
* Since last December, at least 10 shelters for migrants have been destroyed by fire. Fortunately so far, no casualties.
** Equivalent to France’s Interior Ministry. Ulrich Mäurer is a social democratic SPD party.
*** The press reported this attack in the newspapers the next day, citing fifteen masked men who attacked the building around 1h45 with stones and paint bombs.
This attack resulted in 5 windows smashed and a luxury flowerpot destroyed outside the entrance. Despite the quick call to the police from young students returning from a school trip who were scared stiff, the cops arriving three minutes later fortunately were unable to get their hands on anyone.
Regarding the reaction of power as a result of this attack, it was immediate: the police spokesman said that the building is now protected by night patrols stationed outside it. Cops added that they have begun an investigation and will analyze CCTV images.