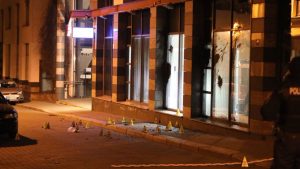 On the evening of February 2nd, 2018 we attacked the cop station on Biedermann street in Leipzig Connewitz with paint and rocks.

The German police are a major player in the ever-worsening waves of repression against the anti-fascist and anti-authoritarian movements. The so-called ‘police post’ in Leipzig Connewitz was set up in 2014 by the city of Leipzig, in response to attempts by the local residents to fight against rising rents and repression, as well as various attacks against state institutions. The declared goal was to pacify a rebellious district by deploying occupation forces.

The police are by no means ‘friends & helpers’, at least not for the Connewitz population. At most, they are called ‘friends’ by the property owners, who, at the expense of the people living here, are promoting the gentrification of the neighborhood. They assist the fascists when they are attacked. The ‘security’ of the police is security for investors and entrepreneurs.
Those who secure the ruling exploitative society and the continuation of capitalist exploitation, who deport refugees and chase anti-fascists, have no right of residence in Connewitz.

Defend your neighborhoods against gentrification, fascists and cops! 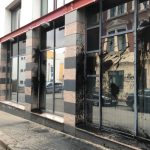 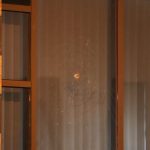 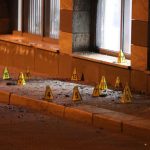