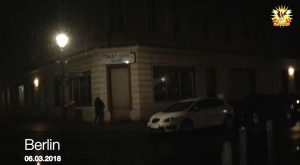 On Wednesday night in Berlin, young women angered by the attacks of the occupying Turkish army carried out a radical action against a cafe run by Turkish fascists.

In the lead-up to March 8 (International Women’s Day), Young Women’s Revenge Unit Şehid Viyan Soran carried out a radical action against a cafe run by Turkish fascists in the Wedding district last night. The cafe walls were spraypainted with the slogans ‘FCK AKP’, ‘Free Afrin’ and ‘Free APO’ (Abdullah Öcalan) and the windows of the cafe displaying Turkish flags were smashed. The action was carried out as revenge for the YPJ fighter Viyan Soran, who was martyred a few days ago in the historic resistance of our era in Afrin.

A communique claiming the action stated: “While the Turkish State has been carrying out illegal attacks against foreign territory in Afrin for weeks, the Federal Republic of Germany is now receiving Turkish Foreign Minister Mevlüt Çavuşoğlu for the third time in two months. The massacre of the civilian population in Afrin is not mentioned by the acting Federal Foreign Minister Sigmar Gabriel.
We strongly condemn this policy of silence on the part of the German State and we will not stop our actions until the war against Afrin ends”.