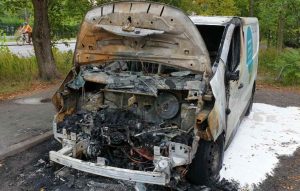 At the beginning of August we attacked two Vonovia vans on the Martin-Wagner ring road, we smashed the windows, sprayed slogans on the exteriors and emptied the contents of a fire extinguisher inside them.
We set another one of fire on the night of August 26th on Kiefholz street. We took care to insure that no other cars caught fire.

Vonovia (formerly Deutsche Annington) is the largest real estate group in Germany with almost 400,000 apartments. In 2018 it made a profit of 1.07 billion euros (previous year: 920.8 million euros) and a turnover of 6.5 billion euros.
A dividend of 746 million euros is to be distributed to the shareholders in 2019. The largest single shareholder is Blackrock with 8 percent (Fast-CDU chief Friedrich Merz is chairman of the supervisory board and a lobbyist there). Incidentally, they are also the main shareholder of Deutsche Wohnen with 10 percent.
Vonovia’s monthly rent in Germany rose by 4.4 percent compared to the previous year to a current average of 6.52 €/m². For the year 2019 it is set to rise again by a similar amount.
Vonovia doesn’t make the majority of its profits via rental income, but through ridiculously expensive utiltiy bills.

The trick here is that Vonovia invoices itself for maintenance and modernization via one of its 350 subsidiaries and then passes these invoices on to the tenants. The landlord alone – Vonovia – decides whether this maintenance is really necessary. Vonovia calls this rip-off strategy “insourcing of services for optimal process management and maximum cost control”.

And this is also where Vonovia cars come into play, white vans with large Vonovia lettering that can be seen in almost all German city centres. These are company cars that belong to the so-called “property attendants”, strictly speaking not Vonovia, but one of the aforementioned subsidiaries. The four largest are Deutsche TGS, Deutsche Multimedia Service GmbH, Vonovia Immobilienservice GmbH and Vonovia Wohnumfeld Service GmbH.

The task of the so-called “property managers” who drive around in Vonovia cars is not, as some might think, to carry out necessary repairs on broken windows, for example. This would be in the interest of the tenants. However, repairs should not be charged to the tenants who are already paying for maintenance costs.

Accordingly, the largest part of the tasks of the “property managers” does not extend to repairs, or finding real defects, but to general controls, which alone serve to minimize the administrative effort, the risks of the landlord and the acquisition of information for business control – “optimal process management and maximum cost control”.
In other words, instead of repairing broken water pipes, the “property managers” have the job of driving white Vonovia transporters from property to property and driving up ancillary costs by getting inspired to invent new “maintenance measures” that can be invoiced to tenants. Tree and hydrant controls, for example. The costs of this “property management” are billed via the operating costs and thus charged directly to the tenants and clearly exceed the – far too low – wages of the employees who are “property managers”. Both tenants and employees are thus victims and exploited by Vonovia and its subsidiaries.

Because moving to a new tenancy agreement in Berlin has become unaffordable for most tenants, too many of these scams have to be put up with.
And because of this systematic rip-off, Vonovia has raised its profit forecast for 2019 by a few hundred million.
The shareholders will be pleased.

Vonovia’s “insourcing” strategy sees profit maximization at all costs for tenants who are dependent on affordable housing. The basic needs of hundreds of thousands of people are being exploited to satisfy individual profit interests.

We show solidarity with all those who fight against the city of the rich, by whatever means they consider necessary. This struggle cannot be seen in isolation from the existing capitalist conditions that produce the exorbitant rents in the first place.