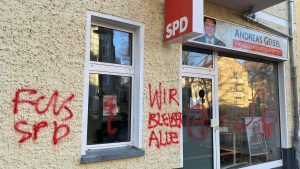 Last night, three constituency offices of the Berlin SPD were demolished. On the one hand with interior senator Andreas Geisel in Dönhoffstraße (Karlshorst), on the other hand with the finance senator Matthias Kollatz in Schützenstraße (Steglitz) and also at an SPD office Naugarder Straße (Prenzlauer Berg). Our action is directed against the displacement of autonomous spaces in Berlin. With the memorandum of view on the political leaders, we want to remind the city that we do not accept attacks against our structures. If there are evictions, we will dissolve all SPD offices in this city. We operate in FLINT only and mixed reference groups.

Andreas Geisel has been an interior senator since 2016. He was previously a member of the economic consultancy PricewaterhouseCoopers, then of Lichtenberg Local Politics (Baustadtrat, Umweltstadtrat and also District Mayor) and for two years Senator for Urban Development. He survived the affair about a party donation from the real estate investor Klaus Groth (50,000 euros so that Geisel makes the development of the Mauerpark by Groth possible) unscathed. Just in time for the attack on Breitscheidplatz, he took over the post of interior senator. Under him, the Berlin police became more and more militarized. He hired hundreds of new cops, even equipped them with tanks for civil wars, and wants to legalize murders by cops with the „Final Rescue Shot“. The new quality of the police state is first felt by those who are already marginalized (e.g. homeless people, migrants or those considered to be those). Not a day goes by when Andreas does not defend his gang of professional thugs and murderers, relativizes their actions and legitimizes them under the rule of law. Any small push to regulate the safety apparatus is rebuffed. Even the investigation of the crimes of the network of Nazis and cops are blocked by Geisel (e.g. Investigative Committee Neukölln). Instead, he uses every opportunity to discredit freedom, to cover it with „factual violence“ and to criminalize opposition movements. Geisel continues what Henkel (CDU) started. He, too, will bite his teeth at the plan to make Berlin a clean but hostile place. The increasing number of militant actions shows that the expansion of the security architecture cannot bring about social peace.

Matthias Kollatz has been a finance senator since 2014. First for the CDU/SPD Senate, now for Red/Red/Green. Previously, he was with the European Investment Bank and also held hostage at PricewaterhouseCoopers. He is a friend of publicly-promoted economic growth while privatizing. He recently managed to push through his record budget of 31 billion for 2020, with few changes. Matthias’s success story is long, but the public is not interested in what is behind it.

One third of the tax revenue goes to state employees (bulls, teachers, etc.). The investments for social housing mainly flow into the overpriced buyback of former state-owned apartments of DeutscheWohnen and AdoProperties and increase the returns of the shareholders. By the way, the state-owned housing company Berlinovo, as a bankrupt mass of the Berlin banking scandal, is once again generating profits – because it only offers overpriced housing.

As the top treasurer, Kollatz also manages all the country’s possessions and plays as KingofCastle. This also includes the fact that the Land of Berlin is speculating with the remaining building land and vacant buildings. The finance senator prevents the continuation of projects such as Potse&Drugstore because he either has other plans for the buildings or keeps the long list of possible replacement objects secret.

The way in which the Finance Senate and the Senate in Berlin act as de facto decision-makers has made the two senators a target for us.