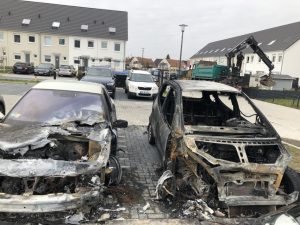 We would like to show solidarity with all those who want to cross the borders, up to here, to one of the richest and most saturated countries in the world. But our strength is neither sufficient to spread this message, nor have build structures to provide security and access for people without passports or for people with a migration background. So we sit silently in front of our screens, filled with hatred at the pictures of the Turkish-Greek border security and horrified at the attack in Hanau.

As a reaction we focus on the tangible enemy within.

What the current “findings” of the BKA (Federal Criminal Police Office) on Hanau show, that the assassin is not a right-wing motivated perpetrator according to their categories, is just a cynical commentary, which steers the discourse away from who in this country, through the NSU to Hanau, is exposed to the danger of agitation, threats and even deadly attacks.

In response, we focus on the tangible enemies, on those who are effectively working on sealing off Islamophobia and racism bite-sized in talk shows, social media or media actions as an ideology that is morally equal to other democratic currents. An obviously not too difficult undertaking in the FRG and all of Europe. All that was needed was another openly racist party like the AfD, and all the others were fishing unabashedly for the right-wing.

Whether the inhuman thoughts were already solidified before the socially acceptable representation, or the Germans radicalized themselves over the politics of the 2015 summer – the AfD is the train that is cheered on, that is jumped on, that must ultimately be seen as an honest expression of opinion of a part of the German population.

To attack activists of the AfD in a targeted manner is just one stone which we must take away from the construction project of a connectable fascism.
With direct actions we can can accompany a process, which must, however, develop far more points of attack.
In the meantime, it is necessary to stand upright in everyday life and at night in secret to take sides that are far more uncomfortable and isolated than those of the German normality.

We call for the continuation or the completion of our projects even in times of Corona, in times of empty cities. In the remote sterile new building area of Falkenberg, the streets were as dead as before Corona. It is possible, and observation forces will find it difficult to follow us (without technical aids) unrecognized over long distances.
Who if not we are trained to move more skillfully under these conditions?

Torched on the night of April 1st, the car of a soldier, based for the AfD in BVV Lichtenberg, Marianne Kleinert, David-Friedländer-Weg 72, Renault Laguna, gray, B-MK2589.