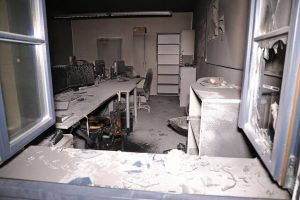 For some time now, militant resistance has been stirring against the ongoing construction of prisons in Zwickau. In the meantime, many companies involved in construction, planning or logistics have been affected. Particular attention was paid to the construction company Hentschke Bau, whose boss had also attracted negative attention through donations to the AfD. However, such a large project involves many participants and we do not want to be accused of forgetting anyone. So in the night from September 16 to 17, we dedicated ourselves with a few liters of gasoline to the engineering office Rathenow in the Albertstadt. We broke two windows and placed incendiary devices in the rooms. We hope that the fire disturbed the smooth running of further prison planning and that the company understands: Whoever earns money from the construction of prisons will have to bear the consequences! On the area we found additionally still another Bonzenschlitten, we set it without further ado on fire.

We see in jails a place of pointed mutilation, where people are (supposed to be) broken. The outcasts of society are locked away here to hide problems in living together. Instead of taking collective responsibility for these problems, it is left to the judiciary to decide who is allowed to live in the world outside the walls and who should only view the narrow perimeter of the prison through bars and fences. As anarchists we oppose state repression, we oppose the imprisonment of people, be it through analogous walls or the technological imprisonment in the open air prison. With the same determination, we stand with the prisoners. The struggle inside and outside the jails takes a wide variety of forms that complement each other. Some people stand in front of the prison on New Year’s Eve or write letters, others organize against the conditions and make known the deplorable conditions behind the walls, still others take care of the concrete support of the inmates. Now and then, some go out with the aim of calling the profiteers of exploitation and imprisonment to account.

Here is a text with positions on prisons that we share: https://chronik.blackblogs.org/?p=11185

Despite all our hostility towards prisons and the society that needs them, we were motivated to take this action by the ongoing imprisonment of Lina and the start of the trial against her and other companions last week here at the Higher Regional Court. They are accused of attacking fascists and organizing as a criminal organization. They are accused of having acted consistently anti-fascist, that is, of having fought fascists effectively. Those who claim that this fight is to be waged at the ballot box, in parliaments or in “democratic discourse” fail to understand the history of this disgusting country. Since the state is the basis of fascism, the struggle against fascism cannot be limited to the means permitted by the state. Fascists must also be attacked militantly, they must be afraid to continue to be active, they must be prevented from their anti-human activities in a tangible way.

We thank the comrades who beat up fascists!

We send the crackle of our flames to Lina. ELLA/Up1 and Boris!

P.S.: For setting fire in the building we used about 6 liters of gasoline, which we distributed in 4 bottles with 1.5 liters volume. We ignited the car with a small 0.5 liter bottle, also filled with gasoline. In order not to produce good pictures on the surveillance cameras, we wore rain ponchos to disguise our body shape and gait. To make our head shape unrecognizable, we used hats, The further development of video anaylsis worries many comrades. With this insight we want to show possibilities to resist against this surveillance technique.

Here you can find a list of other prison profiteers: